Green Homes Out of Trash Built by Texan 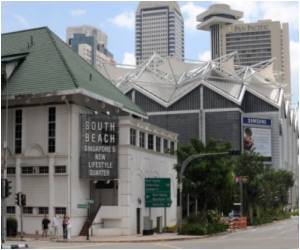 These days recycling is the name of the game.

The fantastical houses which spring from his imagination are made almost entirely with materials which would otherwise have ended up in a garbage dump.


"People have been doing this for hundreds of thousands of years: using whatever is available to build shelter," Phillips said. "If you ponder what could be used, then building materials are everywhere."
Advertisement
Phillips founded Phoenix Commotion 12 years ago with the aim of creating a new model for sustainable, affordable housing.

The 13 homes he has built so far would fit better in an art museum than the residential streets of Huntsville, a conservative town of about 35,000 people best known for housing Texas's death row.

Living in them is a bit like living in a roadside attraction.

"Almost every day, somebody knocks on the door and says 'Is there any way that we could see?'" said Edie Wells, an artist who rents a room in the Bone House.

Her home features patio furniture and a stairway made of bones, floors covered in wine corks and beer bottle caps, and a skylight that used to be a Pyrex baking dish.

Wells said visitors are most impressed when they see a bathroom with its walls, floor and ceiling entirely paved in mirror shards.

Then there's the Storybook house that looks like it was transplanted from a 16th-century German village. Hansel and Gretel could have lived here.

One family built the Budweiser House in homage to their favorite American lager. The home doesn't look exactly like a beer can, but the exterior keeps the red, white and blue coloring and the symbolism -- stars and Hops blossoms -- you'll find on the Budweiser label.

Phoenix Commotion is a for-profit company that operates more like a nonprofit, aiming to solve several universal social problems.

For as little as $10,000 it builds affordable homes for single parents, low-income families and artists.

Plus, each house is highly energy efficient with ample insulation, an on-demand solar hot water heater and a catchment system that recycles rainwater to flush the toilet and wash clothes.

Phillips hires unskilled workers, teaches them marketable skills and helps place them in higher-paying jobs when they're ready.

"He's given me the opportunity to learn how to build, but also to tap into that creative side of myself," said apprentice Shannon Bryant. "And it's nice to find that, and let that out."

The company has diverted hundreds of tons of construction waste from landfills by upcycling the materials into habitable buildings.

So much construction material comes to Phoenix Commotion's door that storage is a constant dilemma.

Phillips helped the city of Huntsville start a program called Trash Into Plowshares in 2003 after being overwhelmed with donations.

The materials are stored in a city warehouse and distributed for free to low-income residents and nonprofits to make building improvements.

"It does save us in costs," said Jenine Dean, assistant superintendent of Huntsville Solid Waste Services.

"But more importantly it keeps the stuff out of the landfill. Because we are just running out of room."

Huntsville's endeavor has been so successful that people across the United States and the world have talked with Phillips and city officials about creating reuse warehouses.

The city of Houston, the fourth largest in the United States opened a similar warehouse in October 2009.

Within just six months, Houston's warehouse diverted 200 tons, the weight of a Boeing 747.

Phillips continues trying to spread his recycled-house philosophy by speaking at events across the United States, and by using the Internet to reach out to like-minded individuals.

"It's cradle-to-cradle thinking. It's sustainable. And we are tidying up our own backyard at the same time," Phillips told AFP.

"I'm not going to be saving the world anytime soon. But there needs to be at least cameo visibility for this model in this century."

Iron Intake Calculator Blood - Sugar Chart Find a Hospital How to Reduce School Bag Weight - Simple Tips Turmeric Powder - Health Benefits, Uses & Side Effects The Essence of Yoga Pregnancy Confirmation Calculator Blood Donation - Recipients Vent Forte (Theophylline) Hearing Loss Calculator
This site uses cookies to deliver our services. By using our site, you acknowledge that you have read and understand our Cookie Policy, Privacy Policy, and our Terms of Use