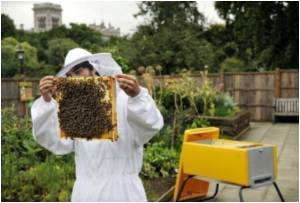 Scientists at the Universities of Sheffield and Sussex are embarking on an ambitious project to produce the first accurate computer models of a honey bee brain in a bid to advance our understanding of Artificial Intelligence (AI), and how animals think.

The team will build models of the systems in the brain that govern a honey bee's vision and sense of smell. Using this information, the researchers aim to create the first flying robot able to sense and act as autonomously as a bee, rather than just carry out a pre-programmed set of instructions.

If successful, this project will meet one of the major challenges of modern science: building a robot brain that can perform complex tasks as well as the brain of an animal. Tasks the robot will be expected to perform, for example, will include finding the source of particular odours or gases in the same way that a bee can identify particular flowers.


It is anticipated that the artificial brain could eventually be used in applications such as search and rescue missions, or even mechanical pollination of crops.

Red Wine may be Key to Long Life

Resveratrol a compound found in red wine may be key to longevity, says study.
Advertisement
Dr James Marshall, leading the £1 million EPSRC1 funded project in Sheffield, said: "The development of an artificial brain is one of the greatest challenges in Artificial Intelligence. So far, researchers have typically studied brains such as those of rats, monkeys, and humans, but actually 'simpler' organisms such as social insects have surprisingly advanced cognitive abilities."

Called "Green Brain", and partially supported with hardware donated by NVIDIA Corporation, the project invites comparison with the IBM-sponsored Blue Brain initiative, which is developing brain modeling technologies using supercomputers with the ultimate goal of producing an accurate model of a human brain.

The hardware provided by NVIDIA is based on high-performance processors called "GPU accelerators" that generate the 3D graphics on home PCs and games consoles and power some of the world's highest-performance supercomputers. These accelerators provide a very efficient way of performing the massive calculations needed to simulate a brain using a standard desktop PC - rather than on a large, expensive supercomputing cluster.

"Using NVIDIA's massively parallel GPU accelerators for brain models is an important goal of the project as they allow us to build faster models than ever before," explained Dr Thomas Nowotny, the leader of the Sussex team. "We expect that in many areas of science this technology will eventually replace the classic supercomputers we use today."

Green Brain's researchers anticipate that developing a model of a honey bee brain will offer a more accessible method of driving forward our knowledge of how a brain's cognitive systems work, leading to advances in understanding animal and human cognition. "Because the honey bee brain is smaller and more accessible than any vertebrate brain, we hope to eventually be able to produce an accurate and complete model that we can test within a flying robot," said Dr Marshall.

"Not only will this pave the way for many future advances in autonomous flying robots, but we also believe the computer modelling techniques we will be using will be widely useful to other brain modelling and computational neuroscience projects," added Dr Nowotny.

Alongside this, the research is expected to provide a greater understanding of the honey bee itself. Because of their role as pollinators, honey bees are vital to many ecosystems, yet their declining population in recent years has given scientists cause for concern. Green Brain's modelling could help scientists to understand why honey bee numbers are dwindling and also contribute to the development of artificial pollinators, such as those being researched by the National Science Foundation-funded Robobees project, led by Harvard University.

A new study has pointed out that thrill-seeking behaviour is not limited to humans and other vertebrates, honeybees also portray this personality trait.
Advertisement
<< Smartphones Come With Good Memory-aid Applications to Help ...
Organizations Must Watch Out for 'Workplace Psychopaths' >>