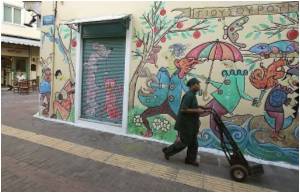 Greeks are simply enjoying and living for the moment, before they begin gearing up for the next austerity measure expected next month.

Hundreds of thousands, Greek Prime Minister George Papandreou included, have flocked to beaches for a holiday respite some say could be their last before living conditions are drastically changed by wage cuts and price hikes.

Greek Tourism Buckles Under Pressure of Strikes and Fuel Shortage

Disaster has struck Greece's crucial tourism industry at the peak of a summer season badly needed by its recession-hit economy with a national fuel shortage compounding weeks of on-off work unrest.
Advertisement

The exodus peaks this weekend ahead of the Dormition (Assumption) of the Virgin Mary feast on August 15, one of Greece's foremost public holidays.


"These could be my last calm holidays for a while," says Thanassis, an advertising company employee vacationing on the island of Serifos, where the overworked Greek finance minister also reportedly took a respite.

Three out of ten Europeans aged 16 or more admit to being smokers, according to a study published by the European Commission, with Greece heading the list.
Advertisement
"Everybody is waiting for September without knowing whether it will be a new beginning, or the beginning of the end," he told AFP.

Papandreou's Socialist government, which has imposed draconian cuts to put right decades of fiscal mismanagement, has a full plate of reforms due, many of them likely to spark discontent from unions in the wake of six general strikes and protests this year against earlier measures.

Officials want to liberalise a number of professions where restrictions on entry or pricing have stymied competition for years, including freight truckers, taxi drivers, notaries, pharmacists, engineers and architects.

The truckers' union last month reacted with a week-long haulage strike that nearly starved the country of fuel at the height of the tourism season.

The government is also under EU pressure to open an energy market currently dominated by state electricity operator PPC and to overhaul ailing state railways OSE which it says is Europe's most troubled public company.

Both PPC and OSE unionists have pledged to fight back.

The reforms are closely monitored by the European Union and the International Monetary Fund which in May bailed out Greece with a massive loan after fears over the state of its economy pushed Athens' borrowing costs to prohibitive levels.

The loan, worth 110 billion euros (141 billion dollars) over three years, is being released in stages depending on Greece's progress on the austerity plan.

Papandreou, who took a break on the scenic Cycladic island of Paros after a grueling first 10 months in office, must also think ahead to local elections in November under a new administrative system involving fewer municipalities that has angered some local leaders.

The premier reportedly spent his time on the island swimming, canoeing and sampling local taverna fare but is also believed to be planning a cabinet reshuffle and drafting a keynote speech on the economy in early September.

Meanwhile, Greeks have been coming to grips with post-crisis reality in the country which is caught in a deepening recession spiral, with emergency taxes pushing up prices amid widespread wage and pension cuts.

The output slump accelerated with a sharp second-quarter contraction of 1.5 percent after a 0.8-percent shrinkage in the first quarter.

Unemployment was officially recorded at 12 percent in May with unions warning the real figures are much higher.

The national traders' association this week reported that 17 percent of businesses in central Athens have shut down because of the crisis while inflation, at 5.5 percent in July, is the highest since 1997.

"We take better care of our money these days," notes Vassilis Vassilopoulos, a public administration employee relaxing at his family summer home in the Peloponnese after his contract was not renewed earlier this year.

"We used to take a week's vacation abroad but this year we'll stay closer to home," he said.

People living in countries that were once conquered by the Roman army may be more vulnerable to AIDS as compared to others, according to a study.
Advertisement
Advertisement

Summer vacation is coming to an end, are your kids ready to go back to school? But, getting addicted to ...

Is the summer heat making you feel tired and dizzy? Check out these simple tips to help you beat the summer ...