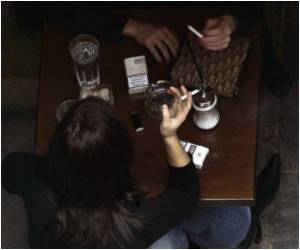 Greece has pledged to enforce smoking ban enacted last year. The latest after decades of failed effort and continues to be widely flouted in Europe's most nicotine-addicted nation.

The health ministry said it would hire additional inspectors to bolster a feeble response by municipal officials as a leading anti-tobacco activist on Wednesday rejected arguments by cafes and restaurants that the ban chases away their patrons in the midst of a bitter recession.

"We need to protect public health even if it hurts the pockets of some people," Panagiotis Bechrakis, a prominent pulmonary expert, told Flash Radio.


A day earlier, Health Minister Andreas Loverdos had warned that the crackdown would be enforced "without exception."

"Those who smoked in bars, restaurants and cafes in recent months have smoked enough," he told reporters.

Every cigarette you smoke is causing irreversible damage to your body; slowly killing you from the inside. It also endangers those around you, your family and children.
Advertisement
As a response to the reluctance of many mayors to aggressively pursue the ban -- a trend largely blamed on local elections in November -- Loverdos said hundreds of state inspectors would be brought in to do the job.

"The state can be ridiculed no longer," the minister said, noting that in the last two months there had been 343,000 complaints from non-smokers but only 3,000 fines were imposed.

Restaurant and cafe owners say that business is already down by 30-50 percent because of the recession gripping Greece, and the smoking restriction has brought a further slump of up to 80 percent in turnover.

The latest legislation bans smoking in all enclosed public spaces except casinos and large music halls which have a nine-month extension to June.

Those who persist in flouting the law face fines from 50 to 500 euros ($67 to $670) while business operators risk tougher penalties of 500 to 10,000 euros and repeat offenders could have their licenses revoked.

Over 40 percent of Greeks are smokers and go through an average of over 2,900 cigarettes every year.