Greece on Tuesday said it was recalling all sunflower oil imported since January after a Ukrainian batch was found to be tainted with mineral oil, sparking a two-week food scare.

"We have decided to recall the entire supply of suspect sunflower oil from the market," Development Minister Christos Folias told reporters.

The Hellenic Food Authority (EFET), whose chairman resigned Tuesday, said that all sunflower oil imported since January 1 would be seized for tests amid concern that tainted quantities may have escaped customs inspection.


The volume of oil to be seized was not specified, but EFET has already located over 6,000 tonnes of contaminated oil.

The affair has caused widespread concern in Greece where sunflower is used for cooking at home and in restaurants, bakeries and pastry-making.

But the contamination does not pose a risk to public health, EFET said.

EFET's new chairman Antonis Zabelas said the sweeping recall was decided "because we cannot be sure whether more contaminated quantities have entered the market, beyond those already detected."

The inspectors earlier this month ordered the recall or seizure of almost 3,000 tonnes of imported Ukrainian sunflower oil, but subsequent tests found another 3,060-tonne haul to be similarly tainted.

"Our services have been checking all quantities of imported Ukrainian oil," the minister said.

Ukrainian authorities have been unable to explain the cause of contamination, EFET said.

The alert follows similar moves in France, Spain and Italy over around 40,000 tonnes of oil suspected to have been deliberately contaminated.

Spain's Health Ministry Lifts Warning Over Sunflower Oil
Spain's health ministry on Monday said that sunflower oil is safe to use once more, insisting that a batch from Ukraine contaminated with hydrocarbons had been removed from the market.
READ MORE

Spain Orders Withdrawal of Sunflower Oil from Sale After Health Alert
Spain's food safety agency said Saturday it has ordered all sunflower oil to be withdrawn from sale after a batch from the Ukraine was found to be contaminated with hydrocarbons.
READ MORE

Spain Warns Consumers Against Using Sunflower Oil for Cooking
Spain's food safety agency warned Friday against consuming sunflower oil after a batch from the Ukraine was found to be contaminated with hydrocarbons although it said there was no health risk.
READ MORE

Edible Flowers for Health
Flowers bloom to touch your soul with its beauty and bring out your innate healing potential. There are innumerable flowers, which are edible that enhance flavor, texture, and palatability to your food besides promoting health.
READ MORE 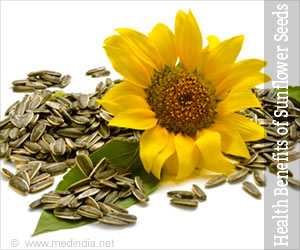