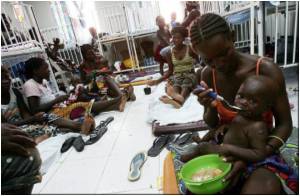 With the country ranking 6th in terms of the worst living conditions in EU, almost one in every five Greek homes faced deprivations last years, statistics reveal.

ESYE said that, in 2012, as the country's economic crisis gathered pace, 19.5 percent of the population had trouble obtaining a variety of basic goods and services.

Redefine Poverty Indicator to Begin at the Time of Conception

The World Bank must define life expectancy, its key poverty indicator, as starting at the time of conception and not at the time of birth if millions of lives
Advertisement

"During the last five years (2008-2012) there is an increase in material deprivation in at least four out of nine categories of basic goods and services," the agency said.


"Specifically, 19.5 percent of the total population in 2012 faces financial burden" obtaining these goods and services, it said.

Basic needs include the ability to face unexpected financial expenses, afford a week's holiday away from home, eat meat every second day, heating one's home or purchase a home appliance.

Growing up in poverty can have long-lasting, negative consequences for a child. But for poor children raised by parents who lack nurturing skills, the effects may be particularly worrisome.
Advertisement
This difficulty affected 76.3 of the poor population but also 30.8 percent of the non-poor, the survey found.

Greece descended into crisis in 2010 after concern over its fiscal figures pushed its borrowing costs through the roof, forcing the then-government to seek an EU-IMF rescue to avert bankruptcy.

In return, Athens was forced to adopt a strict austerity programme of state spending cuts and layoffs, wage cuts and tax hikes, and marked by soaring unemployment.

The top five European countries in terms of living standards are Switzerland, Sweden, Luxembourg, Norway and the Netherlands, ESYE said.

The bottom five are Bulgaria, Romania, Latvia, Hungary and Lithuania.

How to Choose the Best Eczema-Friendly Moisturizer for Children?
View all
News Archive
News Resource
Advertisement
News Category
Harm Reduction in Current Tobacco Control Treaty  WHO's Critique Tobacco Epidemic Continues and is Far From Endgame Summer Camps: Safety Not Always a Priority for Most Parents International Tea Day: 5 Destinations to Celebrate This Day Internet Addiction: Root Causes and Prevention
More News
Sign up for Wellness Consult a Doctor Sign up for Selfcare