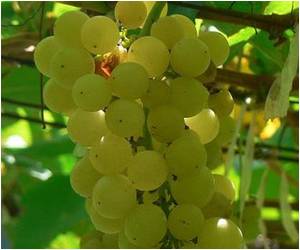 Grape seed extract (GSE) may help to kill head and neck cancer cells, while leaving the healthy ones intact, according to a study by an Indian origin scientist and his team.

Nearly 12,000 people will die of head and neck cancer in the United States this year and worldwide cases will exceed half a million.

"It's a rather dramatic effect," said Rajesh Agarwal, PhD, investigator at the University of Colorado Cancer Center and professor at the Skaggs School of Pharmaceutical Sciences.


It depends in large part on a healthy cell's ability to wait out damage, stated Agarwal.

"Cancer cells are fast-growing cells. Not only that, but they are necessarily fast growing. When conditions exist in which they can't grow, they die," he explained.

A list of Must Know Top 12 Cancer Facts of the World.
Advertisement
Grape seed extract creates these conditions that are unfavorable to growth.

Specifically, the study found that grape seed extract both damages cancer cells' DNA (via increased reactive oxygen species) and stops the pathways that allow repair (as seen by decreased levels of the DNA repair molecules Brca1 and Rad51 and DNA repair foci).

"Yet we saw absolutely no toxicity to the mice, themselves," said Agarwal.

Again, the grape seed extract killed the cancer cells but not the healthy cells.

"I think the whole point is that cancer cells have a lot of defective pathways and they are very vulnerable if you target those pathways. The same is not true of healthy cells," Agarwal added.

The Agarwal Lab hopes to move in the direction of clinical trials of grape seed extract, potentially as an addition to second-line therapies that target head and neck squamous cell carcinoma that has failed a first treatment.

The finding was published this week in the journal Carcinogenesis.