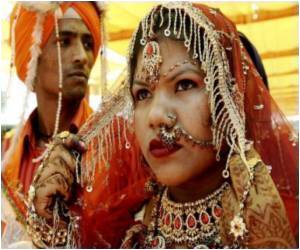 As the poor people in India face price hike in flour, onions and other basic necessities, Indian weddings are getting bigger and extravagant. The Food and Consumer Affairs Minister K.V.Thomas has condemned these feasts. He said that the government could launch an awareness campaign to curb this extravagance and bring a new law in this regard.

About half of Indian children under 5-years are malnourished. All the ministers have suggested restricting this food wastage at the wedding feasts. About 15-20% of all food grains and vegetables in India are wasted during extravagant and luxurious functions. If this food wastage was regulated, about 2/3 of the population would have enough to eat.

Bollywood On Hire At the New Bigger, Fatter Indian Wedding

R.K. Chudawala, a diamond merchant in New Delhi, added sparkle to his wedding last year by hiring top Bollywood stars to attend the celebrations -- but he comes over all coy when asked
Advertisement

In recent years, weddings in India have become more extravagant- expensive gifts accompany the invitations, flowers are imported, top chefs are flown in from New York or Tokyo and festivities spread across multiple cities. Now-a-days no wedding is complete without at least 3-different cuisines offered to guests. Â Another new trend is using helicopters for the bride and groom, instead of the traditional white horse or decorated coach. Fees for the helicopters start at about 2,000pounds. Wedding organizer, Neeti Bhargava said, "It's true that people waste a lot because there's a huge variety of dishes and they take a bit of everything to try it. There's a limit to the amount anyone can eat though."

The days of big fat Indian weddings appear to have taken a backseat in these tough times.
Advertisement
<< Reduction in Teen Pregnancies
Organic Food Debate >>

Digging Up the Past: Premarital Investigations a Hit Among Brit-Indians