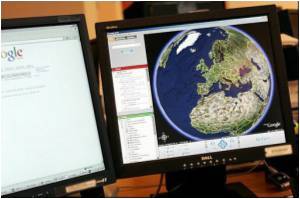 Since Tuesday Google's free online mapping service set out to assist people to navigate indoors of airports, transit centers and major shops in the United States and Japan.

The latest version of Google Maps for smartphones powered by Android software began providing detailed floorplans marked with blue dots showing where users are to within several meters.

Google Inc. is working on a new test version of its search engine, which the company claims will be faster and more relevant than ever before.
Advertisement

"Google Maps for Android enables you to figure out where you are and see where you might want to go when you're indoors," Google Earth and Maps vice president of engineering Brian McClendon said in a blog post.


The California-based Internet titan partnered with large retailers, airports and transit stations to launch the feature and said it planned to continually add new floorplans of public buildings around the world.
Advertisement
"When you're inside an airport, shopping mall, or retail store, a common way to figure out where you are is to look for a freestanding map directory or ask an employee for help," McClendon said.

"With the release of Google Maps 6.0 for Android, that directory is brought to the palm of your hands, helping you determine where you are, what floor you're on, and where to go indoors," he said.

Businesses interested in adding floor plans to Google Maps were invited to upload the information at maps.google.com/floorplans.