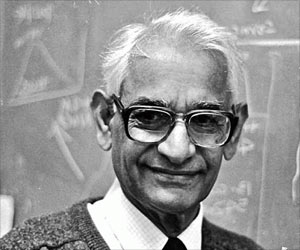 A Google Doodle is a special, temporary alteration of the logo on Google's homepages. Google honoured Indian-American biochemist and Nobel laureate Har Gobind Khorana, known as the first scientist to chemically synthesise DNA molecules, with a doodle marking his 96th birth anniversary.

Khorana was born in Raipur, which is Kabirwala in present-day Pakistan. He was the youngest of five children.

Advertisement
‘The Google Doodle honoured Har Gobind Khorana, who won a Nobel Prize in 1968 for his work on genes and nucleotides, which are the basic structural units of DNA.’

His father Ganpat Rai Khorana worked as a taxation clerk in the British Indian administration. The Khoranas were the only literate family in the village with nearly 100 people.


Khorana lived in India until 1945 and then moved to England to study for a Ph.D degree at the University of Liverpool, after which he received a Fellowship award from the Indian government.
Advertisement
From 1952 to 1960, Khorana served as a faculty at the University of British Columbia, where he began his Nobel Prize winning work in the field of biologically interesting phosphate esters and nucleic acids.

In 1966, he became a naturalized citizen of the US and also received the prestigious National Medal of Science award.

In 1968, he bagged the Nobel Prize for Physiology or Medicine along with Marshall W. Nirenberg and Robert W. Holley for his research that showed how the order of nucleotides in nucleic acids, which carry the genetic code of the cell, control the cell's synthesis of proteins.

Khorana died of natural causes in November 2011 in Massachusetts, aged 89. He is survived by his children Julia and Davel.