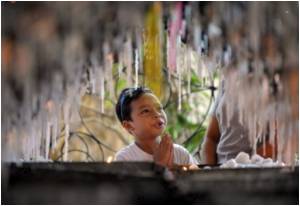 Hundreds of devotees began re-enacting Jesus's crucifixion amid gory scenes, while millions of other less extreme faithful across the Catholic country of Philippines prayed with their families on Good Friday.

People are traditionally nailed to crosses or have their backs whipped until they are bloody in Asia's major outpost of Catholicism, to remember the day when when Christians believe Jesus Christ was put to death 2,000 years ago.

Brit Kids Clueless on Why We Celebrate Christmas and Easter

A new survey has revealed that less than three quarters of the kids in Britain know that Christmas is celebrated to mark the birth of Jesus Christ.
Advertisement

In the small farming town of Cutud north of Manila, over a dozen people readied themselves for crucifixion on Friday morning as men whipped themselves in a spectacle that has been attracting crowds for years.


The Catholic church has discouraged the practice and criticised the organisers of the event for commercialising Good Friday to attract tourists, but the "penitentes" were unapologetic.

Local hairdressers nearly go out of business, once every 10 years, as this Bavarian village crucifies Jesus all over again.
Advertisement
The most senior of those to be crucified, Ruben Enaje, 50, said he was going through the ordeal this year for the 25th time as a way of giving thanks to God for allowing him to survive an accident unscathed.

"I will do this for as long as I can endure it," Enaje told reporters.

He expressed disappointment with the church's opposition to his act of sacrifice.

"If they only respected our panata (sacred vows). This comes from the depths of our heart. We are not showing these off, we have our own beliefs," he said.

However Enaje was taking some precautions. He had his own set of nails for crucifixion that had been soaking in alcohol for a year to avoid becoming infected.

Enaje said he heard that other Philippine villages were paying people to be crucified, but insisted that things were different in Cutud.

"The people in Cutud are sincere. We aren't doing it for the money," he said.

District tourism officer Ching Pangilinan said that local authorities had an obligation to manage the event to prevent tourists from mobbing the place or being robbed or accosted.

"People just come whether we promote it or not. So tourism assistance is necessary. We're not promoting it as a religious act but as a cultural tradition," she said.

German photojournalist Gunther Deichmann, a longtime resident of the Philippines, said the event was not as genuine as it had once been.

"Its a little bit more like a carnival now. Maybe 20 years ago it was more realistic," he said.

One penitent, Ernesto Zulueta, 50, was being lashed for the eighth year in row for the sake of his son, Alexander, who he said was born with epilepsy.

His wife, Jenilyn, said her husband had himself nailed to a cross so his son would beat the condition, and she believed his efforts were working.

"Through the help of this panata, Alexander has been getting better. Before he dragged his feet around, but now, he is in better health and really active," she said.

Elsewhere in the country, Good Friday was marked with extreme solemnity with virtually all offices, stores and restaurants closed for the day.

Music, laughter and loud noises are all discouraged in respect for Christ.

Instead, devout Catholics make pilgrimages to different churches to pray, following the "stations of the Cross" or Christ's journey from the Last Supper to his burial and resurrection.

Nearly 80 percent of people in the Philippines are Catholic, a legacy of the nation's 300 years of Spanish colonial rule that ended at the beginning of the 20th century.

This is quite the holiday season with the Easter weekend and bank holidays round the corner.
Advertisement
<< Witch Hunts Lead to Deaths
PGI to Get a New Director by Month End >>