Go Jogging, Outside the Gym to Get Fit and Boost Energy 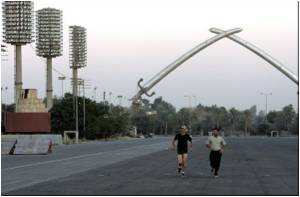 If you're planning to get fit, get out of your gym, research suggests. And head to the nearest park and start jogging to boost your energy levels and uplift your mood.

A walk in the great outdoors is better for body and mind than pounding the treadmill, according to research.

And those who burn off calories by jogging in the park or hiking on the moors feel happier than those who break a sweat in the gym.


They also have more energy and may even find it easier to concentrate at work.

It is thought that being surrounded by nature encourages the mind to relax, while the feeling of escaping from the bustle of everyday life may help beat the blues.

Is there anyone in this world who fails to be swayed by the magic of youth? None, for when youth explodes joyously all Nature smiles!
Advertisement
And saving money on gym membership fees could also give many a reason to smile.

The findings come from a review of 25 studies comparing the benefits of exercise in natural environments, such as parks, forests and university campuses, with 'synthetic' ones, including gyms and leisure centres.

Exercising outdoors is better at cutting anger, fatigue and sadness than exercising indoors, according to the journal BMC Public Health.

Those who chose an open-air workout also felt more energetic, and often found it easier to concentrate.

However, there was no firm evidence that exercising outdoors is better for blood pressure or the immune system.

And not all 'natural' environments are created equal - with those who did physical activity in parks and other green spaces benefiting more than others who pounded pavements.

'This systematic review contributes a rigorous and objective synthesis of the evidence for added benefits to health from activities in a natural environment," the Daily Mail quoted the University of Bangor researchers as saying.

From Strength to Strength, at Your Own Pace: New Fitness Technique

A particular strength training technique that allows athletes to increase strength by progressing at their own pace, provides better results than standard techniques in which resistance
Advertisement
Advertisement

It is important for us to understand the power of daily exercise. Only then can we motivate ourselves to ...
This site uses cookies to deliver our services.By using our site, you acknowledge that you have read and understand our Cookie Policy, Privacy Policy, and our Terms of Use  Ok, Got it. Close
×

Go Jogging, Outside the Gym to Get Fit and Boost Energy Personalised Printable Document (PDF)