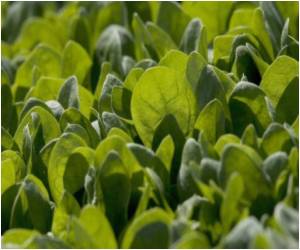 Tucking into more spinach and other green leafy vegetables can reduce the risk of Type 2 diabetes, a study published on Friday by the British Medical Journal (BMJ) said.

The research wades into a controversial area, and its authors caution more investigation is needed to confirm the findings.

A team led by Patrice Carter at the University of Leicester, central England, reviewed six studies involving 220,000 people that explored the link between fruit and vegetable consumption and Type 2, or adult-onset, diabetes.


Eating one and a half extra servings of green leafy vegetables cut the risk of diabetes by 14 percent, but eating more fruit and vegetables combined had negligible impact, they found.

Learn more about Type 2 Diabetes, a disease that is taking the world by storm!
Advertisement
Type 2, the commonest form of diabetes, has spread fast from rich countries to fast-developing economies as fatty, sugary diets and sedentary lifestyles take hold.

More than 220 million people worldwide are afflicted with the disease, which kills more than one million people every year, according to the World Health Organization (WHO). As obesity rates increase, the number of deaths could double between 2005 and 2020, the WHO has said.

Nutrition and exercise are known factors in prevention, but which foods work best and why remain disputed because so few good-quality studies have been carried out.

Carter's team suggests that green leafy vegetables are useful because they are high in antioxidants and magnesium, but more work is needed to bear this out.

In a separate study published on Wednesday in the British Journal of Pharmacology, Chinese scientists said a compound extracted from various Chinese herbs helped reduce the impact of Type 2 diabetes in mice.

The product, known as emodin, inhibits an enzyme called 11-Beta-HSD1, which plays a role in resistance to insulin, the hormone that helps clear excess sugar from the blood.

Emodin can be extracted from Chinese rhubarb (Rheum palmatum) and Japanese knotweed (Polygonum cuspidatum) among others, the paper said.

"Researchers would need to develop chemicals that have similar effects as emodin, and see which if any of these could be used as a therapeutic drug," said Ying Leng of the Shanghai Institute of Materia Medica.

Diabetes is controlled by injections of insulin and blood-sugar levels. If unchecked, the disease can lead to heart disease, vision loss, limb amputation and kidney failure.

Almost one-third of the people are unaware of the risk factors of diabetes. Find out if you run the risk of diabetes by using Diabetes Risk Assessment calculator.
Advertisement
<< Tai Chi - For Chronic Pain Condition
Drug-eluting Stents Safer >>