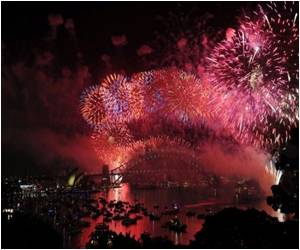 New Year 2014 begins with a bang as Sydney kicked off New Year celebrations with a dazzling fireworks display, the first in a wave of pyrotechnics to usher in 2014 from Hong Kong to world record-chasing Dubai.

Seven tonnes of explosives lit up Australia's biggest city, with fireworks shooting off the Opera House for the first time in more than 10 years as part of the December 31 extravaganza, focused on the Harbour Bridge.

"They were absolutely fantastic," said Murphy Robertson, from Denver in the United States, after watching the Aus$6 million ($5.4 million) show which attracted some 1.5 million people to harbour vantage points.


"The Opera House was fantastic, but the thing that really got me was the sparks, the golden curtain of sparks going off the bridge."

A record three fireworks displays took place -- at 9pm, 10:30pm and midnight -- showering colour over Sydney Harbour.
Advertisement
Dubai meanwhile is hoping to break the Guinness World Record for the largest display, pledging to set off more than 400,000 fireworks. Kuwait set the mark in 2011 with an hour-long blast of 77,282 fireworks.

Tonga, located near the international dateline, was one of the first nations to greet 2014, holding a prayer festival that culminated with a bamboo "cannon" fired into the air.

Antarctica was also among the first places to usher in 2014. Passengers and crew on a ship awaiting rescue after being stuck for a week in ice rang in the new year with their specially composed anthem.

Giving a rousing rendition from the top deck of the Akademik Shokalskiy in footage posted on YouTube, the Australasian Antarctic Expedition sang of "having fun doing science in Antarctica", only to lament in the chorus the "bloody great shame we are still stuck here".

In Hong Kong, the city's skyscrapers were lit up by a dazzling eight-minute pyrotechnics show fired from a one-kilometre line of barges along Victoria Harbour.

An estimated 400,000 revellers packed the shoreline to watch the show. Isabella Garrow, a 39-year-old Brazilian living in Jakarta, was there with her children.

"They're used to fireworks on the beach in Rio, so it's a bit different. They're noticing the cold but they're still excited," she told AFP.

Further down, groups of teenagers gathered with sign boards offering "free hugs" to passers by.

"We're doing it because it's fun and it makes people happy," said 16-year-old local Wendy Yip.

In Japan, the celebrations were quieter. Small fireworks displays were held across the country. But millions of people turned out to local temples and shrines to greet the new year with contemplation and to pray for peace for relatives.

For areas ravaged by Super Typhoon Haiyan in the Philippines, celebrations were much more muted than usual.

In Tacloban, which bore the brunt of the November 8 storm, officials were preparing a midnight fireworks display to try to raise spirits in a region where nearly 8,000 died or are still missing.

In the ruined farming village of San Isidro, residents are still grappling with the overpowering stench of death as 1,400 corpses stacked in black body bags lay in a field, more than seven weeks after the tragedy.

Seoul rang in 2014 with a ritual clanging of the city's 15th-century bronze bell 33 times, reflecting the ancient custom for marking a new year.

In Singapore, people flocked to the financial district for fireworks while thousands of white spheres were launched on Marina Bay, holding residents' wishes for 2014.

Jakarta set up 12 city centre stages for performances to showcase the vast archipelago's kaleidoscope of cultures.

However, 6,500 police will be out to ensure security amid warnings that extremists in the Muslim-majority nation may target the celebrations, prompting travel warnings from countries including neighbouring Australia.

In Mumbai, revellers celebrated a court victory over the local police force, which pushed back closing time in bars and restaurants to 5:00 am instead of 1:30 am.

In Rio de Janeiro, authorities are predicting that 2.3 million people -- a third of them tourists -- will crowd Copacabana Beach for fireworks and pop music.

An expected one million revellers will gather in New York to mark the stroke of midnight and the traditional New Year's Eve ball-drop over Times Square.

Cape Town will have a free concert with fireworks and a 3D tribute to Nelson Mandela, who died on December 5.

In the Netherlands however, Dutch police arrested 100 youths who pelted firefighters with bottles and fireworks in a central town notorious for its unruly New Year celebrations.

The violence broke out after a group of revellers in Veen doused a car wreck in fuel and set fire to it in the street -- a New Year's tradition in the town.

Brand-Food Rules for the New Year
With the increasing awareness and emphasis on diet and food, here's a new list of rules. Stick to .....

Plan a Warm and Pocket-Friendly New Year's Eve
Is burning a hole in your pocket at lavish parties with deafening music and a packed crowd of ......

Bizzare New Year's Eve Customs from Around the World
Locals in central Chile who gather in the town cemetery to celebrate new year's eve have bagged the ...