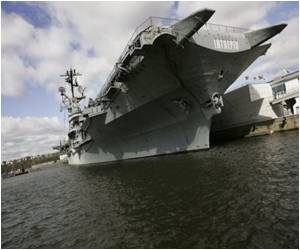 A New York gala to unveil plans for the vessel would be delayed out of respect for the victims of super storm Sandy.

This was said by the flamboyant Australian mining magnate behind the building of the Titanic II.

Reeling under the impact of superstorm Sandy, New York hospitals faced their biggest challenge since the 9/11 disaster, with power outages and emergency evacuations of seriously ill patients.
Advertisement

Clive Palmer said the launch planned to take place on the retired aircraft carrier USS Intrepid in New York, at which he was to unveil the design and plans for his Titanic II project, will be rescheduled for early 2013.


"Mayor Michael Bloomberg cancelled the city's world-renowned New York Marathon last weekend as he didn't want a cloud to hang over the event in the wake of the hurricane and the damage it inflicted," Palmer said.

Hurricane Sandy is the year's second most talked about topic on Facebook.
Advertisement
"New York had a close relationship with the original RMS Titanic and the shipping company White Star Line and we believe it is too early to be holding our launch while the city and the region continues its recovery."

Palmer caused an international stir in April when he announced plans to construct a replica Titanic with almost exactly the same dimensions as its ill-fated predecessor, which sank in 1912, killing more than 1,500 people.

Palmer said he would reschedule the launch for late February, adding that other Titanic II events in London and Southampton in Britain, the US city of Boston, Canada and in the Chinese territory of Macau had also been postponed.

Sandy slammed into New York, New Jersey and other states on October 29, leaving at least 88 people dead and causing widespread damage and flooding.

New York's annual Halloween parade planned for Wednesday, was called off by organizers because of superstorm Sandy that played havoc in the US.
Advertisement
<< 'Secret Boards' Introduced By Pinterest
Denmark To Do Away With Tax on High-fat Foods >>