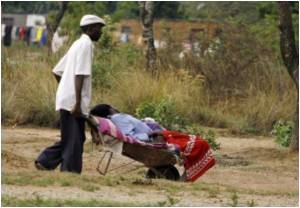 A top prosecutor has confirmed that several Malian health ministry officials have been arrested in connection with a probe into embezzlement from the Global Fund against AIDS, tuberculosis and malaria.

"The use of Global Fund money entrusted to the ministry of health, has given rise to malpractice," said the state prosecutor in financial matters, Sombe Thera.

Thera said the amounts involved are much greater than initially suspected by investigators.


"Initially these malpractices amounted to several hundreds of millions of CFA francs (at least 300,000 euros, 380,000 US dollars). But investigations have revealed them to be much greater," he said, without elaborating.
Advertisement
The misappropriation mostly involved the use of forged cheques, he added.

The prosecutor said a team of fraud investigators from the Global Fund had amassed 55,000 documents relating to the case.

Police and judicial sources have confirmed to AFP that at least 10 people have been arrested in connection with the case, including officials from the health ministry.

A UN diplomat told AFP on condition of anonymity that the embezzlement meant that "several billions of CFA francs (several million euro) had not been spent to treat people."

The Global Fund, based in Geneva, was established by the United Nations in 2002 to collect and allocate funds for the fight against AIDS, malaria and tuberculosis in developing countries.

It depends largely on donations from the Bill and Melinda Gates Foundation.

According to the Global Fund website a total of 76,192,927 dollars has been disbursed to the west African nation, which has an HIV/AIDS prevalence rate of 1.5 percent for a population of 13 million.

In April, the Global Fund suspended aid to Zambia as a result of corruption affecting the health ministry in the poor southern African country.