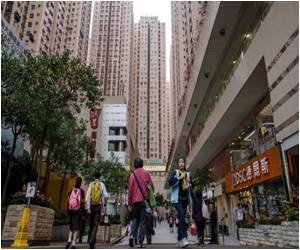 As Hong Kong's Art Basel fair opened, a mass ping-pong match on a giant doughnut-shaped table and the chance to become a citizen of an imaginary country were among the more offbeat interactive works on display.

The "Ping Pong Go-round" was a literal hit with dozens of guests attending a VIP preview before the event -- which showcases the rapid growth of the Asian art scene -- opens to the public Thursday.

The artist, Lee Wen from Singapore, challenged all-comers at his unorthodox table.


"It's like a conference table with no borders," Lee said. "Looking at the world now with globalism and as well as between men and women, the game is quite fair."
Advertisement
A work by Chinese artist Sun Xun offered buyers the opportunity to spend up to US$13,000 on "citizenship" of his imaginary country, the Republic of Jing Bang -- entitling them to one of an unknown number of aluminium suitcases complete with a passport, ID card and a national flag.

"It's an ideology. He's just creating a utopian country, so in this country you can tell lies, nobody knows what is truth and what is false," said Edmund Chan of the Singapore Tyler Print Institute gallery.

With its knack for attracting a global mix of wealthy buyers, artists, gallery owners, VIPs and celebrities, the five-day show is the catalyst for a champagne-soaked itinerary of art fairs, exhibitions and happenings around the city as its gallery scene goes into overdrive.

Internationally renowned artists including Japan's Takashi Murakami and Britain's Damien Hirst and Tracey Emin had a strong showing at the fair.

"Nowhere else on Earth will you find such a rich mix of high-quality work from the leading galleries and artists from both East and West," Art Basel director Marc Spiegler told reporters.

The show also curates selections from the Asia-Pacific region and works by emerging international stars.

German artist Carsten Nicolai was commissioned by Art Basel to turn the 118-storey International Commerce Centre on the Kowloon peninsula into a glowing installation called "(alpha) Pulse", one of many events scheduled around the fair's opening.

The event also highlights the city's own artists, directing its VIPS to more than 150 art events around the city.

Gagosian, White Cube, Acquavella, Lehmann Maupin and Pearl Lam are just some of the big-name galleries to have arrived in the city in the past three years, despite its crushing property prices.

Art Basel last year replaced Art HK, Hong Kong's former art fair that was set up in 2008 before being taken over by the high-profile Swiss Art Basel franchise.

Craft Beer Revolution Hops Along in Hong Kong
When Rohit Dugar moved to Hong Kong from New York three years ago, he realized that he did not like ...

Number of H7N9 Bird Flu Cases Rise to Six in Hong Kong
Hong Kong confirmed its sixth case of H7N9 avian flu after revealing that the virus was found in an ...