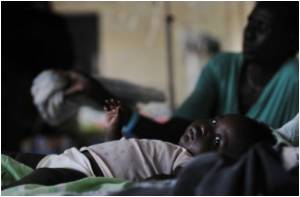 Although anti-malaria efforts are being increasingly successful with fewer casualties,the fight must become more intensive supported by increased funding, states a report.

Insecticide-treated mosquito nets, indoor residual spraying and preventive malaria treatment during pregnancy have saved the lives of nearly three quarters of a million children in 34 African countries over the past 10 years, according to the study published by the Roll Back Malaria Partnership (RBM).

Most of those lives have been saved since 2006, when the malaria fight got a big injection of cash.


Another three million lives could be saved by 2015 if there is a continuing effort to increase investment to tackle the disease worldwide, said researchers from Tulane University, Johns Hopkins University, the World Health Organization (WHO) and the PATH Malaria Vaccine Initiative.

Interactive section of Medindia gives details regarding waterborne disease
Advertisement
Malaria kills more than 850,000 people each year worldwide, most of them in sub-Saharan Africa, where it is responsible for nearly 20 percent of infant deaths.

The disease is contracted when people are bitten by mosquitoes infected with a parasite called Plasmodium.

It causes fever and vomiting and can quickly become life-threatening by disrupting the blood supply to vital organs.

The parasites have developed resistance to a number of malaria medications in many parts of the world and it has been more than a decade since a new class of malaria drugs began to be widely used.

Malaria is particularly lethal to pregnant women in sub-Saharan Africa, where 10,000 of them die each day due to related complications, such as anemia.

"Without continued investment in malaria, reaching the MDG for child survival is unlikely to be reached in Africa."

The Millennium Development Goals (MDGs) were launched with much fanfare by UN member states in 2000 with the aim of halving poverty in the world from 1990 levels by 2015.

Although development aid increased at first, it has since fallen and none of the goals, which include cutting child mortality rates by two-thirds, halving the number of people in absolute poverty and reducing HIV/AIDS, are on target to be reached.

UN Secretary-General Ban Ki-moon estimated Monday that more than 100 billion dollars was needed over the next five years to reach the MDGs.

"To reach the Millennium Development Goals, we must accelerate our efforts to expand not only malaria prevention and treatment, but also a broad range of community-based health services."

World leaders are due to meet for a three day summit at the UN headquarters on September 21-23 to review the eight MDGs.

The Global Fund to Fight AIDS, Tuberculosis and Malaria -- the main source of world funds for anti-malaria programs -- will hold its third fundraising campaign in November, at which time governments will announce the amount of their financial support.