Glimmer of Hope for US Urban Decay: Ex-Drug Dealer 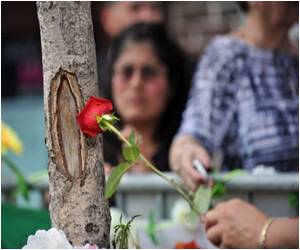 One of the poorest and most dangerous of US cities, Camden, New Jersey, is offered hope by a former drug dealer who did prison time, as he pushes to give his community a new lease on life amid urban decay.

"I was not supposed to be on this side of statistics -- to be alive, free, to take care of my kids," Anthony Dillard, now an entrepreneur and artist, told AFP.

Grateful for his reversal of fortune, the bearded, soft-spoken 40-year-old with a broad smile decided to try to make a difference.


Together with his partner AJ Riggs, he created a fashion label last year -- "Made in Camden" -- in the aim of "restoring the morale and pride of our community."
Advertisement
Dillard is hoping that his creations -- from baby onesies to bright T-shirts -- can help put the city back on the map for reasons other than ruin and rampant crime.

Raised by his grandmother in what used to be a predominantly Polish neighborhood, Dillard says he knows what it's like having to live off very little.

"We were poor but we had food on the table, clean clothes, some heat," he said.

And yet, as a teenager, he succumbed to the temptation of selling drugs on street corners for hard cash.

It all started when he was just 15.

"I began to notice our economic situation -- my grandmother couldn't get me new sneakers," he said.

"I had been an academically gifted student but then I became a 15-year-old boy with $1,000 in my pocket."

Reflecting back on that life-changing move, Dillard added wistfully: "I dropped out of high school for the lure of gold chains and new sneakers."

It got him 10 years behind bars.

When Dillard left prison in 2009, Camden was in ruins.

Today, several years later, most of the houses are abandoned, their windows boarded up. Many are on the verge of collapse. Whole blocks have been reduced to rubble.

But it all used to be so different, recalled Karl Walko, a union leader who also grew up here.

Camden, located not far from Philadelphia, was indeed once abuzz with shipyards, and the proud home of both the RCA record label and a bustling Campbell's Soup factory.

But then the shipyards and the factory were shuttered and replaced by cement and wastewater treatment plants that employ few but pollute considerably.

The city has also been the victim of massive mismanagement.

Three mayors were incarcerated for corruption. Tens of millions of dollars in state aid have been pumped into a handful of projects -- a hospital, the renovation of some neighborhoods, an aquarium -- without tackling the city's critical unemployment and crime problems.

"We need 800 good paying jobs, $20 an hour," said lawyer Justin Loughry. "That would feed 800 families and then fuel a whole economy."

With little being done, 42 percent of Camden's population -- 95 percent of which is either African American or Hispanic -- lives below the poverty line.

And if that weren't bad enough, violence claims victims on a regular basis.

Dillard's older brother, a war veteran, lost his life to a bullet -- not on the battlefield but back home.

"He served two terms in Iraq but he got shot when he came back here," he said.

Faced with all this hardship, Dillard decided to put his past behind him and become a role model.

He even started painting murals on abandoned houses. One of his works is dedicated to his dead sibling. Others, in vivid colors, include pacifist messages such as "love our kids," "faith moves mountains" and "stop the killing."

One of the paintings salutes Camden Mayor Dana Redd, who has seen her power dwindle as the state of New Jersey and the local county increasingly take control of the city, which is virtually bankrupt. For example, the city's police force was fired last year and replaced by that of the county.

Redd has acknowledged the city's "long-standing economic and social wounds" but, as she took office for a second term in January, said change would not come overnight.

"Contrary to what the naysayers may think, I cannot turn water into wine or walk on water. And, no, I do not possess a magic wand, or fairy dust to be able to grant wishes," she said.

While the most recent statistics indicate a drop in crime, some in the community doubt those figures paint an accurate picture.

"There is no real progress, some murders are not registered," said community activist Gary Frazier.

"People just see a bunch of white police officers who can't tell the difference between law-abiding citizens and the others."

Dillard, however, praises the police action.

"People dare go out on the streets again," he said.

Still, Dillard generally prefers to "shy away from politics" and doesn't expect much from the powers that be.

"'Made in Camden' is about self-sufficiency," he said.

Source: AFP
Advertisement
<< Concern for the Future of Their Only Stud, Horse-loving Gag...
Simple Tips to Take Care of Rebonded Hair >>

Buying or Selling Alcohol in New Jersey is Punishable
Buying or selling alcohol anywhere within New Jersey city limits is punishable with jail time. So .....

Study Finds Rise In Diagnosis of Stroke In New Jersey Children
A new study shows that the diagnosis of ischemic stroke is on the rise in New Jersey children....