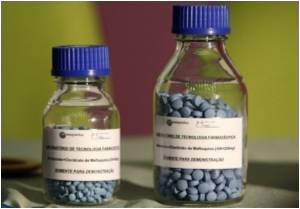 The US Food and Drug Administration (FDA) has given its nod for the marketing of anti-malaria tablets, atovaquone and proguanil hydrochloride in the country, Glenmark Pharmaceuticals said.

The drug marker revealed that its US subsidiary, Glenmark Generics, has received the permission from the FDA to market the anti-malarial tablets in the US and added that the company will be marketing it under 250mg and 100 mg variants.

The approval comes after the company said that it had settled a lawsuit with GlaxoSmithKline in April 2010 which gives it the royalty license to market atovaquone/proguanil 250mg/100mg tablets, which are generic variants of GSK's Malarone tablets.


"Glenmark believes that it is entitled to 180 days of exclusivity with respect to its atovaquone/proguanil 250mg/100mg tablets as the first generic to file an ANDA for the product", Glenmark said in a statement.