Give Needles, Condoms to Inmates to Curb HIV 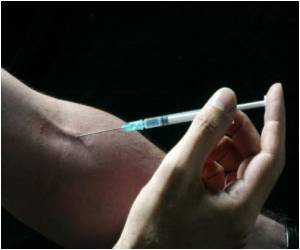 Statistics show that 15 to 25 percent of Europe's inmates were convicted of drug-related offences and one prisoner in six is a drug user.


"We support opioid substitution treatment and harm reduction measures, including needle exchange programmes. These measures are crucial, otherwise we cannot tackle HIV and other infections in prisons," Stefan Enggist of the World Health Organisation (WHO) said during an international conference on addiction in prisons organised by the Council of Europe this week in Bucharest.


So far, only 60 prisons around the world conduct needle and syringe exchange programmes, said Heino Stover, a professor at Frankfurt University.

Some countries, such as Poland for religious reasons, even forbid condom distribution in prisons, he added.

Patrick Penninckx, executive secretary of the Council's Pompidou Group, a drug policy agency, said strategies should aim both to "reduce drug supplies and deal with the consequences of addiction."

Most inmates inject drugs and share needles, which leads to the transmission of blood-borne viruses, especially HIV and hepatitis C, said Stover.

In Eastern Europe and Central Asia, the number of people living with HIV surged by 250 percent from 2001 to 2010, with Russia and Ukraine accounting for almost 90 percent of the region's epidemic, UNAIDS figures show.

"Over the last 15 years, there was an enormous uprise in HIV infection in Romania and Bulgaria, a phenomenon driven by injecting drug use," Stover told AFP.

Prison populations are among the most vulnerable. Estimates released by AVERT, an international HIV and AIDS charity, show that 55,000 out of Russia's 846,000 inmates were infected with HIV in 2010. In Estonia, four studies revealed HIV prevalence in prisons ranging from 8.8 to 23.9 percent.

To reduce HIV incidence, experts call on penitentiary authorities to admit that drug smuggling cannot be altogether stopped. Instead they should supply clean needles and condoms.

But progress is slow. In Germany, the programme is in force in barely one prison out of 185. In Romania, the prison of Jilava, south of Bucharest, has recently introduced the system.

"Our aim is to reduce the risk of HIV and other infections," Cristian Micu, the Jilava prison's spokesman, told AFP.

In a country where drug possession and use is a crime, information about inmates benefitting from this programme is confidential as only penitentiary doctors are authorised to supply needles, he stressed.

"Romania is ahead of other East European countries, but it should expand this programme," Stover said.

A study conducted in 11 prisons has shown that needle distribution has not led to an increase in drug use, nor were needles used as weapons and no new case of HIV was recorded, he said.

Georgia's government last year started a pilot programme to supply condoms to inmates - much to the surprise of prison officials - to fight hepatitis transmission.

Experts also insist on the need to provide opioid substitution treatment to drug-using inmates. "This will reduce illegal drug use, prevent infectious diseases and eventually save lives," said Hans Wolff, head of the Geneva University Hospitals Unit of Penitentiary Medicine.

In Moldova, seven prisons out of 17 provide methadone to inmates and according to Svetlana Doltu, a prison psychologist, this has made them "more willing to work and more tolerant".

And then there is abstinence. At Jilava, 25 inmates, former addicts, several of whom were convicted over drug trafficking, are part of a "therapeutic community" set up under a Norwegian-backed programme.

In exchange for their commitment not to use drugs, they enjoy better detention conditions, with more sports and cultural activities.

Ion Gusa, 39, a heroin addict for 11 years serving a six-year jail sentence for drug trafficking, said he was determined not to relapse after his release. "Drugs nearly destroyed my life, I want to stay clean when I get out of here."

Stover said abstinence only worked for a few inmates and stressed that the key was a combination of prevention and harm reduction programmes.

"We are not lacking guidelines and recommendations. The important thing is that the good examples achieved so far motivate other countries to do the same."

HIV Prisoners Denied Food, Drugs: Zambia Court
Zambia's High Court heard that prisoners who are HIV-positive were being denied access to drugs and ...

Bihars Prisoners to Get Their Own Multi-Purpose Smart Card
Jails in Bihar are going hi-tech after the government announced that it will be issuing a ......

Minister Confirms China to Stop Relying on Prisoner Organs
A health minister in the country has confirmed that China will no longer rely on executed prisoners ...

Spark for an Extraordinary Love Story in Myanmar Prison
Htein Lin's artworks were his lifeline during years in Myanmar jails -- painted on scraps of ......