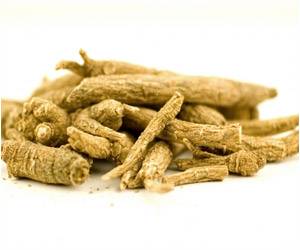 Bacterium found in the soil close to ginseng plants' roots appears to significantly dissociate the protein aggregates associated with Alzheimer's disease, reports a new study. The findings of the study are published in the journal Angewandte Chemie International Edition.

The area around the plant roots is a complex ecosystem with various interactions between plants and diverse microorganisms. The so-called rhizosphere has been neglected in searching for new drugs, though it has much to offer.

Advertisement
‘Ginseng is an Asian plant used in traditional medicine, where it is used as a tonic. ’

New research has now identified a natural substance called rhizolutin that may provide a foundation for treating novel Alzheimer's disease. Rhizolutin is produced by a Streptomyces strain that originates in the root zone of ginseng plants.


Screening of natural product libraries showed that rhizolutin is a drug lead that could dissociate tau tangles (fiber-like aggregates of tau proteins) and amyloid-β (Aβ) plaques, both of which are common hallmarks of Alzheimer's disease. Such deposits form when amyloid-β proteins fold wrongly to form β-sheets, which can aggregate to form insoluble plaques and fibers. These lead to nerve cells' death, nerve inflammation, brain atrophy, and the cognitive losses these entails. No efficient treatment for Alzheimer's disease has been found.
Advertisement
The team demonstrated, through a variety of in vitro and in vivo experiments, that rhizolutin leads to clear dissociation of tau and insoluble Aβ aggregates. In neuronal and glial cells culture, rhizolutin markedly reduced the inflammatory processes and cell death caused by Aβ. Rhizolutin can significantly dissociate the Aβ plaques present in mice's brains with Alzheimer's.

The process appears to be similar to the removal of wrongly folded proteins through immunotherapy. Computer simulations infer that rhizolutin enters into the hydrophobic regions of the aggregated β-sheets, starting the dissociation.

Blue Cohosh
Blue cohosh is a herb used in herbal remedies that gives relief for chronic conditions like rheumat...