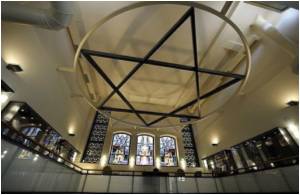 Brandys synagogue in central Czech Republic sat for 40 years forlorn and forgotten after its Jewish faithful perished under the Nazis.

A glossy wooden bimah -- a raised platform from which the Jewish holy book, the Torah, is read -- and benches have been restored to their former glory, all thanks to a grant from the European Union aimed at reviving the near-extinct heritage of Czech Jews.


Men wearing traditional Jewish kippa skullcaps packed the temple earlier this month for the reopening of this modest 19th-century synagogue in Brandys and Labem, a provincial town 30 kilometres (19 miles) northeast of Prague.
Advertisement
"The only thing missing is the Jewish community which reminds us of the sad part of regeneration -- that communities not only in the Czech Republic, but across all of Europe, were exterminated," the republic's Chief Rabbi Karol Efraim Sidon said at the opening.

Decimated by the Holocaust, discriminated against under 40 years of Communism and now facing the rise of ultra-nationalist parties across Europe, the Czech Jewish community has been granted a new lease of life thanks to the EU co-funded project, dubbed "10 Stars".

Thought to number only around 30,000, the community is poised to reopen 15 Jewish sites, mostly synagogues and schools, in 10 towns across the country.

"It's a symbol of a revival of Jewish life," Gary Koren, Israel's ambassador to Prague, told AFP after the ceremony at the Brandys synagogue, which will be used for exhibitions and concerts.

Worth 10 million euros ($14 million), the project targets provincial Czech towns, shifting the focus from Prague's famed Jewish Quarter -- which receives around half a million visitors each year -- to more rural areas.

The EU contributed 85 percent of regeneration funding, with the Czech government stumping up the rest.

- Market, archives, and a garage -

The Protectorate of Bohemia and Moravia established by Germany in 1939 -- covering today's Czech Republic minus large chunks of borderland seized by Nazi Germany -- had a Jewish community of nearly 120,000.

But close to two thirds of them perished during World War II, according to Israel's Yad Vashem World Centre for Holocaust Research.

After the 1948 Communist coup that installed four decades of totalitarian rule in the former Czechoslovakia, scores of Czech Jews chose to emigrate amid a new wave of anti-Semitism.

The Czech Republic is today home to around 100 synagogues and 300 Jewish cemeteries, according to project coordinator Jan Kindermann.

Just a handful of temples are still used for Jewish services, including the Old New Synagogue in Prague. Built in 1270, it is Europe's oldest active Jewish temple.

Some Czech synagogues are places of worship for other faiths. One is even a garage.

"Buildings were Shoah (Holocaust) victims just as people were," says Tomas Kraus, secretary of the Czech Federation of Jewish Communities.

Each house of worship restored under the scheme features a special historical theme.

The synagogue in Mikulov -- the last surviving temple of a pre-war total of 12 in the southeastern town -- focuses on the life of Rabbi Judah Loew, a 16th-century philosopher who, legend has it, created the Golem of Prague, a giant clay protector of the city's Jews.

The restored synagogue in the northeastern town of Krnov, annexed by Germany in 1938-1945, was one of the few to escape sacking during the infamous "Kristallnacht", or Night of Broken Glass, a November 1938 Nazi pogrom in Germany that killed at least 91 Jewish residents and saw 30,000 shipped eventually to concentration camps.

The Nazis used the Krnov temple as a market hall and it stored state archives during Communist rule.

In the central Czech town of Polna, the exhibition focuses on Leopold Hilsner, a Jewish man accused of blood libel and convicted of the 1899 murder of a local Christian girl amid a wave of anti-Semitic rallies.

He was sentenced to life in prison and then freed in 1918 on an imperial pardon.

Sporting a kippa, the Jewish skullcap worn by men at religious ceremonies, as he attended the Brandys synagogue reopening, Czech Deputy Culture Minister Miroslav Rovensky said much work lay ahead to return the country's temples to their former glory.

"We've come a long way but there are still many sites that need care," he said.