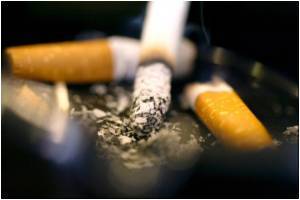 Giant warnings on cigarette packs with messages about impotency and premature ageing have been designed to shock smokers in Russia.

Under the new rules, cigarette producers must cover at least 30 percent of the front of cigarette packs with one of 12 warnings, ranging from "Smoking causes lung cancer" to "Smoking can cause impotency".

Warnings must also cover 50 percent of the back of the pack.


Cigarette packs currently include only a small warning on the front that says "Smoking damages your health" and which must cover only four percent of the area.

Approximately half the smokers die due to smoking -related diseases. But it is not just the smokers who are at the receiving end. The passive smokers too, often pay a heavy price. If you still have not 'kicked the butt', learn more horrifying facts about smoking by participating in the following quiz.
Advertisement
The changes come nine years after similar warnings were introduced in the European Union, reflecting relaxed attitudes to smoking in Russia.

Cigarettes sell for around 40 rubles (one euro) per pack in Russia and smoking in restaurants and bars is still the norm.

Sixty-five percent of Russian men smoke and about 30 percent of women, according to official statistics, and the number of smokers has grown since the 1991 collapse of the Soviet Union, particularly among young women.

The new rules will include warnings aimed at young women, such as messages about premature skin ageing and damage caused by smoking during pregnancy.

Each year more than 350,000 Russians die from smoking-related diseases, according to the health and social development ministry.