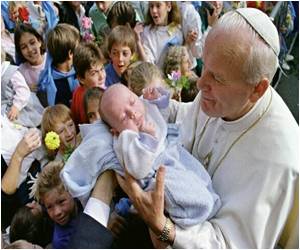 A Polish-made car, 1958 model, that belonged to John Paul II before he became pope, was taken off by a German vintage car enthusiast to honour the pope's canonization.

Marek Schramm is an admirer of the late pope and got behind the wheel of the spruced-up FSO Warszawa, sporting a "JP2" license plate, to make the long trip from Berlin to Italy.

His itinerary will take in Krakow, the southern Polish city where then Karol Wojtyla was archbishop before his surprise election to the papacy in 1978.


Forty-five-year-old Schramm, an estate agent from Ilmenau in eastern Germany, bought the vehicle two years ago.

He has spent more than 2,500 hours bringing it back almost to its former glory with a 17-strong team of Germans and Poles.
Advertisement
Despite the car's advanced age, he hopes to be able to motor into the Italian capital in time for April 27 when the charismatic late pontiff is due to be made a saint of the Roman Catholic Church.

"Its top speed is 115 kilometres/hour (around 70 miles/hour) but really it doesn't like to go over 70," Schramm, whose mother is Polish, told AFP.

Although not a practicing Catholic, he says he greatly admired pope John Paul II, especially for his political engagement.

As pope, John Paul made outdoor appearances in a specially designed "popemobile"; as Karol Wojtyla in Krakow he was driven around from 1958 to 1977 in the duck blue-coloured vehicle.

He always used to sit in the back on the right where there was a reading light.

The model which Wojtyla owned was the only big saloon produced by the Warszawa automaker, under licence from a manufacturer in the Soviet Union.

"Technically it's a very simple car," said Peter Hertwig, one of the mechanics who helped Schramm and will accompany him part-way on the journey.

"In East Germany where I come from, we were used to repairing these type of vehicles."

Schramm, who also grew up behind the Iron Curtain and used to spend his childhood holidays in Gdansk, Poland with his grandmother, kept the bodywork's original colour as well as its beige seat covers.

After being left to rust in a German garage for about 30 years, it also needed plenty of varnish to stop further decay, he said.

"I made a lot of phone calls to Poland looking for spare parts. When I said it was the former car of John Paul II people were really ready to help me.

"Some even gave me parts for free," he said.

What is different now, however, is its number plate.

Today it no longer has a Polish registration, sporting instead a German one -- "IL JP2 H", for the town of Ilmenau, John Paul II and finally "H" for "historisch" (historic) used for vintage cars.

It could also stand for "heilig", or holy in German, Schramm chuckled.

On the dashboard the car's clock is permanently set to the hour of John Paul's death in 2005.

Although he doesn't yet know exactly what he will do with the car when he arrives in Rome, Schramm plans to bring it back to his hometown after the trip and put it on display.

"The trip is a way for me to honour the political role of John Paul II, who shook the Communist regime," said Schramm.

Aged just 13 and in defiance of the East German authorities, he used to discreetly hand out badges for Poland's Solidarity trade union, best known internationally for having helped bring down the Polish Communist regime in 1989.

Schramm said he also spent several months in prison for having tried to flee East Germany.

The 15-day trip is also scheduled to take in Warsaw and Gdansk.

"That all seems quite difficult to me, to drive on the motorway in a car that doesn't go faster than 70 km/hour," said Piotr Staszcyk, the brother-in-law of Wojtyla's driver, who continued to use the car until 1982.

But a distant relative of the driver, Alexander Gawron, a Pole working for giant carmaker BMW in Germany who sold the car to Schramm for an undisclosed six-figure sum, was enthusiastic.

"I wanted the future owner to be a Pole," he said.

Source: AFP
Advertisement
<< Pulitzer Prize Shared by Washington Post and The Guardian f...
Norway Hands Over a Classic Film Thought to be Lost, to Chi... >>

Polish Pope is Still a Rock Star
John Paul II, the charismatic Polish pope who made a name for himself by circling the globe, was ......