German Women are More Physically Active Than Their European Counterparts Yet Remain Indifferent to Sport: Survey 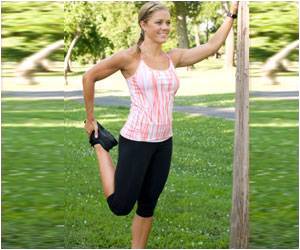 44 per cent of German women did not play competitive sport or spend any time on intensive workouts such as running or cycling, in a given week reveals a new survey. According to a new multi-national survey on sport and exercise habits German women remain reluctant to devote any time to competitive sport, despite being more physically active than their European counterparts in Britain, Denmark, Sweden and France. With Germany favourites to be crowned champions at this summer's UEFA Women's EURO in Sweden, the countdown to the championships offers an opportunity for women to kick start heart-healthy physical activities and set themselves the goal of doing more sport.

"Playing sport can be an important part of an active, healthy lifestyle. In combination with everyday physical activities, such as gardening or even doing household chores, sport can help reduce the risk of heart disease, the number one killer of women, responsible for the deaths of 1 in 3 women worldwide. According to the World Health Organization's Global Recommendations on Physical activity for Health, adults aged between 18-64 years should do 150 minutes of moderate physical activity (gardening, dancing or brisk walking) or 75 minutes of vigorous physical activity (playing sport, running or aerobics) per week. Ahead of International Women's Day, we encourage women to take care of their heart health to avoid paying the penalty of an inactive lifestyle", said Johanna Ralston, CEO of the World Heart Federation.


Although German women are more physically active than their European counterparts, the survey reveals that around 1 in 5 German women did not do enough physical activity, putting themselves at risk of cardiovascular disease (CVD), which includes heart disease and stroke. More than 1.75 million women in Germany are just below the threshold for a healthy level of physical activity. They could reduce their risk of CVD if they set themselves the goal of doing just one hour more per week of playing sport or doing everyday physical activities such as gardening or household chores.
Advertisement
The multi-national survey conducted by YouGov in France, Sweden, UK, Denmark and Sweden, and commissioned by the World Heart Federation reveals that in the Germany:
Advertisement
<< Chelyabinsk Authorities Plan on Launching Meteorite Perfume
Research: Weight Loss Linked to Higher Risk With Implanted ... >>