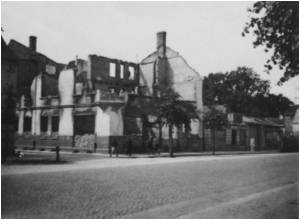 A petition was launched on Tuesday, by Germany's top-selling Bild daily, to remove two Russian tanks from a World War II memorial in central Berlin in protest against escalating tensions in Ukraine.

The tabloid-style newspaper, which sells more than two million copies each day, called on its readers to sign and mail the letter to the Bundestag lower house of parliament.

The former director of a WWII museum in northern France is facing charges of fraud.
Advertisement

"At a time in which Russian tanks are threatening free, democratic Europe, we don't want any Russian tanks at the Brandenburg Gate," Bild wrote, referring to the landmark symbol of German unity since the end of the Cold War.


The petition, which local tabloid B.Z. also ran in its pages, said that Russia had used "the force of arms" to annex the Crimean peninsula and massed troops on Ukraine's eastern border, "threatening the freedom of a sovereign state".

A green vegetable that helped Brits survive through the dark years of World War II, is making a comeback on menu cards, but this time, it has taken the form of a fashionable super food.
Advertisement
"We the signatories of this petition will not accept military force again becoming a political tactic in Europe in the 21st century," it said.

Bild insisted it had no intention of diminishing the "immense suffering of the Russian people during World War II".

But it said the memory of the Red Army soldiers would only be honoured by "not misleadingly linking it to the hegemonic military policies of today's Kremlin leadership".

"The lesson from the cataclysmic bloodshed of World War II must be the message of peace and mutual respect of peoples," it said.

"That is particularly true in the heart of Berlin where the disaster of the 20th century began."

The Soviet War Memorial, one of several such monuments in the German capital, is dedicated to the 80,000 Red Army troops killed during the Battle of Berlin in the the spring of 1945.

It was erected just months after the end of World War II and stands near the Reichstag parliament building, in which graffiti from Soviet soldiers scrawled on the walls was carefully preserved during a 1999 renovation of the building.

The memorial features several columns, a giant statue of a Russian soldier and two tanks and is a site of official commemorations as well as a major tourist magnet.

As part of the international treaty sealing Germany's reunification in 1990, it agreed to maintain all Soviet war memorials in the country and consult Russia before making any changes.

Germany's criticism of Russia during the crisis in Ukraine has at times been muted by the countries' close trade ties but also by the weight of Berlin's war-time guilt.

An estimated 20 million Soviet citizens are believed to have died in the conflict unleashed by Nazi Germany.

A review of 31 peer-reviewed and published studies looked at birth-cohort and gender differences in alcohol consumption, alcohol disorders, and mortality.
Advertisement
<< Stradivarius Viola Could be Priced for $45 Million
Poison-resistant Giant Rats Spreading Across UK >>