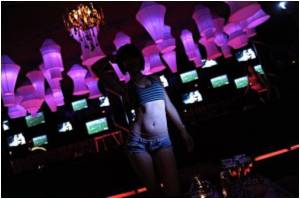 Angry demonstrations were carried out across Germany by the bar and disco owners against proposed new music licence fees which they claim could drive them out of business.

About 5,000 people were expected to protest in the streets of the capital Berlin, whose legendary nightlife is one of its main draws, according to organisers calling themselves "Save Culture".

Protests were planned for other cities across Germany, including Hamburg, Munich and Stuttgart.


GEMA, the country's music rights agency which has a reputation in the industry as one of Europe's most aggressive in collecting royalties, plans to reform its levy on all cover charges for bars and clubs as part of a reworking of its usual fee structure.
Advertisement
It argues that the royalties, due to take effect next April, are essential to help artists, labels and publishers in the ailing music industry and calls the levy "fair".

"Many clubs will have to close or they will have to massively hike their entry price and many patrons will longer be able to go clubbing," Berlin's famed Berghain club complains on its website.

Berghain, whose lengthy queues due to its world-class reputation have become legendary in themselves, claims the new tarifs could translate into an up to 1,400-percent increase in what it has to pay GEMA.

GEMA, which represents about 66,000 German artists, argues its new charges will be more transparent and, for smaller-sized establishments with more moderate entry prices, will mean "net reductions" in royalty charges.

"GEMA claims to defend artists but with these new charges, many of them will no longer be able to perform in the clubs" which will not have the means to be able to host them, said Michael Beyer of "Save Culture".

In June, hundreds of clubs across the country let the decks fall silent for five minutes on a Saturday night to protest GEMA's plans.