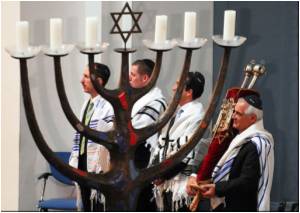 A court ruling in Germany banning circumcision is "extraordinarily dangerous" and should be clarified by the government before the end of the year, said the Jewish rabbi of Jewish rights group.

"We are very concerned that Europe becomes a place where circumcision is made illegal or denigrated," Abraham Cooper from the Simon Wiesenthal Centre told reporters after meeting the German justice minister over the issue.

The German government announced that it will be attempting to identify hundreds of people who died along its internal border during the Cold War.

"That would be extraordinary dangerous and injurious for the Jewish community," he added.


Cooper said he was satisfied after his meeting with Justice Minister Sabine Leutheusser-Schnarrenberger and said he expected the government to introduce legislation protecting the rite "before the end of the year".

Germany Sees a "revolution" on the Home Front, Dads Apply for Parental Leave

Nearly a fifth of new German fathers have applied for parental leave benefits allowing them to stay at home on two-thirds of their pay for a year said the family ministry .

Members of parliament signed up to a cross-party motion in July calling on the government to draw up legislation that "ensures that the circumcision of boys carried out to medically professional standards and without undue pain is fundamentally permissible".

In a ruling published in June, a court in the western German city of Cologne ruled that circumcision on religious grounds was tantamount to grievous bodily harm and therefore illegal.

The ruling prompted outrage and Jewish and Muslim community leaders joined forces to condemn it in the strongest possible terms, seeing a threat to the freedom of religion in Germany.

Diplomats have acknowledged privately that the ruling has proved "disastrous" to Germany's international image, particularly in light of its Nazi past.

Chancellor Angela Merkel is reported to have said that the ruling risked making Germany a "laughing stock".

Turkey's Europe Minister Egemen Bagis wrote in an opinion article in Tuesday's edition of the Sueddeutsche Zeitung that the ruling was in danger of threatening religious freedom in Germany.

Israeli President Shimon Peres has also weighed into the controversy, telling his German counterpart in a letter last week that circumcision is "at the core of Jewish identity".

"On this issue we want to make sure that it won't spread."

Source: AFP
<< Low-calorie Diet may Not Help to Prolong Life: Study
Babies Born After 3 or More Abortions May Come with Increase... >>