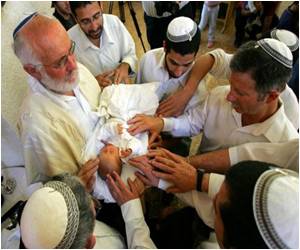 The new law in Germany would permit circumcision under certain conditions, say sources. "The draft is ready. It will be presented next Wednesday" for adoption by the government, the source told AFP.

In June a court in the western city of Cologne published a ruling that the rite amounted to grievous bodily harm, in a case brought against a doctor who had circumcised a Muslim boy.

The ruling united Jewish and Muslim groups in opposition and caused uproar from religious and political leaders in Israel and Muslim countries.


Diplomats admitted that the ruling proved "disastrous" for Germany's international image, particularly in light of its Nazi past.

Germany is home to about four million Muslims and more than 200,000 Jews.

Even as New York's health department considers a law that makes parental consent compulsory for babies to undergo the circumcision ritual, orthodox rabbis in the city are prepared to defy it.

The new bill stipulates certain provisos for a boy to be circumcised, including that it be carried out either by a doctor or, if performed on a baby under six months old, by someone put forward by the religious community who must be as skilled as a doctor.

It also insists on the need for effective pain relief and stipulates an exemption for infants who could be at risk from the practice such as haemophiliacs.

The Central Committee of Muslims in Germany generally welcomed the draft legislation, as did the former head of the Central Council of Jews in Germany, Charlotte Knobloch, who called it "balanced".

But the Deutsche Kinderhilfe children's organisation told local news agency DPA that it rejected the bill, saying it created more problems than it solved.

The health benefits of circumcising baby boys outweigh the risks associated with the procedure, according to pediatric experts.
<< Research Links Sleep Apnea and Stroke
New Drug for the Treatment of Ovarian Cancer Discovered >>

A court ruling in Germany banning circumcision is extraordinarily dangerous and should be clarified by the government before the end of the year, said the Jewish rabbi of Jewish rights group.
News A-Z
A B C D E F G H I J K L M N O P Q R S T U V W X Y Z
What's New on Medindia