German Autobahn the Venue for 'Everyday Life and Culture' 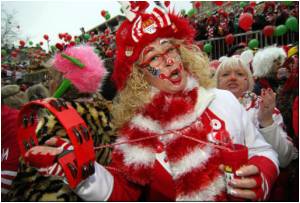 Germany's autobahn was closed to cars and other automobiles on Sunday as it became the scene for a giant street festival in which around two million people took part, organizers said.

Cleared of traffic jams and engine exhaust for 31 hours, the 60-kilometre (40-mile) stretch of one of Europe's busiest motorways, between the western cities of Dortmund and Duisburg, became a stream of pedestrians and cyclists.

Thanks in part to warm sunny weather, the turnout was double what was expected as visitors passed by 20,000 picnic tables lined up end-to-end in what organisers dubbed a moveable feast of "everyday life and culture".


"The motto of the Still-Life event is 'The table is your stage'," event spokeswoman Katharina Jarzombek said.

"Anybody can showcase their band, their hobby, their club or their group of friends."

Meat-cutting robot known by the name of FFDR-V1004 , and introduced during the first doner kebab industry conference in Berlin holds immense promise for the doner kebab industry.
Advertisement
A police spokesman declined to provide an official estimate of the turnout.

Among the participants from the United States, Japan and across Europe was a club of "Star Wars" fans putting on a tribute to the science fiction blockbusters and a brass combo called Tuba Libre.

The event was a highlight in the Ruhr 2010 European Capital of Culture festivities, which has seen Germany's rust belt region transformed into a hotbed of the arts with hundreds of concerts, plays and exhibitions planned throughout the year.

The Frankfurt Book Fair, at which China was guest of honour, suffered a slight drop in numbers this year but remained the world's leading trade show for publishers, agents and authors,
Advertisement
Advertisement
This site uses cookies to deliver our services.By using our site, you acknowledge that you have read and understand our Cookie Policy, Privacy Policy, and our Terms of Use  Ok, Got it. Close
×