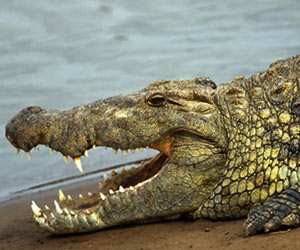 The Defense Threat Reduction Agency (DTRA) supported the research project to find bacterial infection-defeating compounds in the blood of the crocodilian family of reptiles, which includes American alligators.

George Mason's 17-member, multidisciplinary research team discovered ways by which war fighters can be protected from wound infections and potential exposure to bio threat agents in the battlefield.


The project has received $6 million in funding from DTRA and will be worth $7.57 million if fully funded over five years.

Monique van Hoek, study co-author said, "If you look at nature, sometimes we can find pre-selected molecules to study. I was surprised to find peptides that were as effective as they are in fighting bacteria. I was really impressed."

Fighting infections the natural way and preventing them is always more effective than consuming medicines and antibiotics to treat them.
Advertisement
Van Hoek, professor, School of Systems Biology and the National Center for Biodefense and Infectious Diseases, Barney Bishop and Joel Schnur from the College of Science suspected the germ-fighting ability could be in the form of antimicrobial peptides. These very small proteins are part of the innate immunity of alligators and even humans; all higher organisms make antimicrobial peptides. We hope that these could be the basis to develop new treatments.

Peptides are more general in their activity than antibodies, which are made to fight infections by specific bacteria or viruses. "It's that part of your immune system that keeps you alive in the two or three weeks before you can make antibodies to a bacterial infection," Van Hoek says.

"Innate immunity may work less well than antibodies, but it works well enough," Van Hoek adds. "The reason why we're so interested in them: they are part of nature's way of dealing with the onslaught of bacteria and viruses that we face every day. Every breath that you take, every thing that you eat, you're constantly exposed to bacteria and your body needs to fend them off in some way."

The Mason team took an innovative approach and developed custom-made nanoparticles to preferentially capture the peptides out of the very complex mixture of proteins and peptides in alligator plasma.

Bishop, professor in the Department of Chemistry and Biochemistry said, this process revealed an unexpected result that the identified potent germ-fighting peptides were only fragments of larger "parent" proteins.

Antibiotics are among the most used and abused medications. This article explains some general features about antibiotics.
Advertisement
<< Website Uses Videos, Games, Cartoons to Inform Children Abo...
Certain Foods can Ease Hyperactivity in Attention Deficit Hy... >>