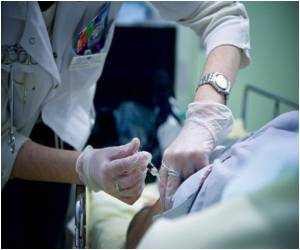 Rhodopsin is a GPCR and member of a large family of transmembrane receptors responsible for many cellular responses and involved in many human diseases.

A recent study in The Journal of General Physiology characterizes the movement of rhodopsin.

Rhodopsin, a pigment of the retina that is responsible for perception of light is also involved in temperature sensation.
Advertisement

In living Xenopus rod photoreceptor cells, rhodopsin is found in stacks of disc membranes that are difficult to study due to their small size. Now, Peter Calvert (SUNY Upstate Medical University) and colleagues have developed an approach with two-photon microscopy that, for the first time, allows direct examination within the living cell of how the geometry of the micro-compartment will affect its signaling.


The team focused on the effect of micro-compartments formed by "incisures", radial membrane boundaries that segment the discs into smaller regions. These micro-compartments, defined by the rim and incisures, have a surface area similar to that of a human or mouse rod photoreceptor disc, so that the total number of components in the GPCR signaling cascade are conserved, and the downstream effects of a captured photon of light are similar. Calvert and colleagues used a novel high-resolution approach to monitor fluorescently labeled rhodopsin as it diffused in the disc membrane. The team developed a model of molecular diffusion to interpret the results that explicitly took the measured micro-compartments into account, and found that the boundary geometry, not heterogeneity in diffusion or a "bound fraction," was sufficient to explain differences in the extent of diffusion or rhodopsin in different regions of the disc.

Skin can Sense and Protect Itself from UV Rays

The Essence of Yoga Blood Pressure Calculator Diaphragmatic Hernia Drug Interaction Checker Sinopril (2mg) (Lacidipine) Find a Doctor Loram (2 mg) (Lorazepam) Iron Intake Calculator Sanatogen Daily Calorie Requirements
This site uses cookies to deliver our services. By using our site, you acknowledge that you have read and understand our Cookie Policy, Privacy Policy, and our Terms of Use