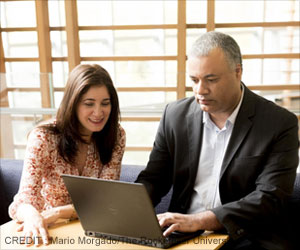 Genomic testing and data analysis could help predict early on whether a person would ultimately respond to a given treatment for psoriasis, say researchers in James G. Krueger's Laboratory for Investigative Dermatology and the Center for Clinical and Translational Science (CCTS) . Psoriasis an inflammatory skin disease afflicts more than 6 million people in the United States.

While scientists such as Krueger have uncovered several of the genes and pathways associated with psoriasis, researchers still rely on lengthy clinical trials to test new therapies, and doctors struggle to select the most effective treatments for their patients.

Psoriasis is a recurrent and complex inflammatory skin disorder that can have tremendous physical and psychological impact on the sufferer
Advertisement
‘New method developed by researchers may benefit psoriasis patients and speed the development of new drugs against the disease.’
Tweet it Now

Searching the genome for patterns


The team used algorithms to sift through gene-expression data collected from psoriasis patients who were enrolled in clinical trials of five different drugs that ran for several months. Skin biopsies were taken from the patients at the beginning of the trials, and also after one, two, and four weeks of treatment. The biopsies were then screened to detect activity among 50,000 different genes. Using sophisticated statistical methods, the scientists searched for patterns in the data and ultimately identified gene-expression profiles that could be used to predict whether a person would respond to treatment after a full 12 weeks.

Learn what causes psoriasis, the appropriate diet to follow and the importance of diet in the treatment of this medical condition.
Advertisement
To boost the power of their statistical models, the researchers combined the results produced by four separate algorithms, each employing different mathematical methods. "It's the wisdom of the crowd," explains Joel Correa da Rosa, a biostatistician in the CTTS who worked on the study.

In addition, says Mayte Suarez-Farinas, a biostatistician who led the research at CTTS and is now on faculty at the Icahn School of Medicine at Mount Sinai, the team developed two kinds of forecasting tools. One, a "universal predictor" meant for use by drug companies, predicts whether a person will respond to an unknown, untested drug like the ones used in clinical trials. The other, a "treatment-specific predictor" meant for use by doctors, is tailored specifically to predict a patient's response to one of the five anti-psoriasis drugs analyzed in the study.

After being "trained" on just a portion of the clinical trial data, the algorithms were surprisingly good at forecasting whether patients whose data had never been analyzed before would respond to treatment. They could, in fact, predict with greater than 95 per cent accuracy whether a patient would respond to an unknown treatment by the 12-week mark--a figure that rose to 97 per cent when predicting their response to one of the five known treatments. And the algorithms were able to achieve that after analyzing only two weeks' worth of previously unseen gene-expression data. After digesting four weeks' worth, they became even more strikingly prescient.

What's more, the algorithms focused on a number of genes that researchers had previously linked to psoriasis through laboratory studies. That not only lends biological credence to the method, says Suarez-Farinas; it also suggests that similar analysis could potentially help shed light on the mechanisms underlying less well-understood inflammatory diseases, pointing towards genes and pathways that may not yet have been identified.

Suarez-Farinas and Correa da Rosa expect that their approach could easily be applied to other inflammatory skin conditions. And with further refinements, their algorithms might one day have the power to predict whether a particular patient will respond to a particular drug even before treatment has begun.

Psoriasis is a non-contagious, non-fatal disease but it can adversely affect one's overall quality of life including trouble with daily activities and social interactions. Take this quiz to find out more about this skin disease.
Advertisement

Dry skin a result in inadequate hydration of the skin. This could be either due to a reduced intake of ...

Hydration, sebum formation and skin acidity determine the skin condition. Along with aging and environmental ...

Scalp psoriasis, a common skin disorder causes lesions on the scalp. There is no cure for scalp psoriasis and ...
This site uses cookies to deliver our services.By using our site, you acknowledge that you have read and understand our Cookie Policy, Privacy Policy, and our Terms of Use  Ok, Got it. Close
×