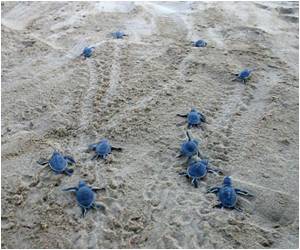 The genome sequencing of the soft-shell turtle (Pelodiscus sinensis) and the green sea turtle (Chelonia mydas) has now been completed by researchers.

These achievements shed new light on the origin of turtles and applied the classical evo-devo model to explain the developmental process of their unique body plan.

The evolution of turtles is an enigma in science. Their distinct body design-with a sharp beak and protective hard shell has changed very little over the past 210 million years.


As the smallest species of soft-shell turtles, Chinese soft-shell turtle was once commonly sold in pet shops. Green sea turtle is considered as the largest of all the hard-shelled sea turtles and is named because of the green fat beneath its shell. Its population sizes have been drastically reduced recently and it has been listed as an endangered species.
Advertisement
To reveal the evolutionary history of turtles and the mechanisms underlying the development of their unique anatomical features, researchers in this project sequenced and analyzed the genomes of soft-shell turtle and green sea turtle.

The project, led by investigators from RIKEN, BGI, and Wellcome Trust Sanger Institute, found the evidence that turtles are likely to be a sister group with the common ancestor of crocodilians and birds from whole genome phylogenetic analyses.

The turtles were diverged from archosaurians approximately between 267.9 and 248.3 million years ago, which coincides with the time range of the Upper Permian to Triassic period that overlapped or followed shortly after the end of Permian extinction.

In the study, researchers performed the brief research on genes may be associated with the turtle-specific characteristics, and found some olfactory receptor (OR) gene families were highly expanded in both turtles.

This finding suggests that turtles have developed superior olfaction ability against a wide variety of hydrophilic substances. In addition, many genes involved in taste perception, hunger-stimulating, and energy homeostasis regulating hormone ghrelin have been uniquely lost in turtles. Researchers suggested that the loss of these genes might be related to their low-metabolic rate.

The consortium also investigated the association of embryonic gene expression profiles (GXP) and their morphological evolution pattern, based on ENSEMBL soft-shell turtle gene-set. By integrating RNA-seq technology, comparative genomics method, and mathematical statistical approaches, researchers confirmed GXP divergence during embryogenesis of soft-shell turtle and chicken indeed follows the developmental hourglass model. They also revealed that the maximal conservation stage occurred at around the vertebrate phylotypic period, rather than at later stage that show the amniote-common pattern.

To clarify the morphological specifications of turtle embryogenesis in late development, especially the formation of the carapacial ridge (CR), researchers investigated into CR-specific miRNA expression, found existence of tissue-specific miRNAs and involvement of Wnt signaling.

Also they revealed the Wnt expression involved in the carapacial ridge (CR) formation of the turtle shell, researchers annotated all the Wnt genes in the two turtle genomes, identifying a total of 20 Wnt genes. Intriguingly, they discovered Wnt5a is the only Wnt gene expressed in the turtle CR region, supporting the possible co-option of limb-associated Wnt signaling in the acquisition of this turtle-specific novelty.

The findings were published online in Nature Genetics.

Researchers 'Capture' the Replication of the Human Genome
For the first time the Genomic Instability Group has obtained a panoramic photo of the proteins ......