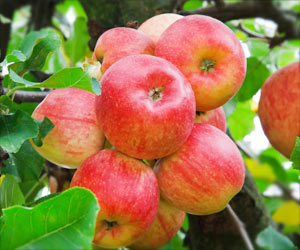 If approved Arctic Granny Smith and Arctic Golden Delicious - two varieties of genetically modified apples will be available to consumers by the end of 2013.

They will be the second GM fruits allowed into the U.S. food supply after the Hawaiian papaya (Rainbow and SunUp).

Created by Okanagan Specialty Fruits in British Columbia, Canada, Arctic apples do not bruise or brown when sliced, the Washington Times reported.


Browning in apples and potatoes results from polyphenol oxidase (PPO), an enzyme that produces melanin, a compound that contains iron and gives cells a brown tint. To create Arctic apples, Okanagan scientists silenced the apples' PPO genes by inserting a man-made gene that contains portions of four natural PPO genes.
Advertisement
As a consequence, Arctic apples produce less than ten percent of the PPO produced by conventional apples and therefore do not brown when sliced.

Unlike most genetically modified crops in the U.S., genetically engineered to resist pests, droughts or chemicals, Arctic apples are modified purely for cosmetic reasons, nicknamed "Botox apples" by Andrew Kimbrell, executive director of the Center for Food Safety.

But Joel Brooks, Marketing Specialist at Okanagan, disagrees that Arctic apples' benefits are purely cosmetic, noting that not only do they have significant potential to reduce food waste, the resistance to browning results in better taste, texture and likely a retention of healthful components like vitamin C and antioxidants, which are typically burned up in the browning reaction.

Supporters argue that Arctic apples can potentially increase apple sales and consumption in the U.S. Arctic apples would be especially lucrative for sliced packaged apple producers, which lose a large percentage of their apples to browning and are forced to spray them with an anti-oxidant that can alter flavor and raise production costs.

Arctic apples will also be a beneficial to the foodservice industry, which does not use a large volume of apples at present, precisely due to browning. Supermarkets will also benefit as Arctics can potentially cut down on losses due to bruising and apples that are no longer attractive for sale.

The non-browning apples would even benefit consumers, who would end up throwing less fruit away and therefore spending less money.

Two US agencies currently stand in the way of Arctic apples' journey to your grocery store produce section: the U.S. Department of Agriculture's (USDA) Animal and Plant Health Inspection Service (APHIS) and the Food and Drug Administration (FDA).

Okanagan is currently seeking "deregulated status" from USDA and APHIS for both varieties of Arctic apples, submitting a petition in May 2010. Specifically, Okanagan will have to prove that Arctic apple crops are not significantly weaker against plant pests and therefore would not endanger other crops that are nearby.

So far, the Arctic Granny Smith has shown increased incidence of a leaf-eating bug known as tentiform leafminer, but for the 13 other pests and diseases tested for by Okanagan, both varieties of Arctic apples have performed better or the same as conventional apples.

"We expect a second U.S. public comment period, which will be 30 days long, to open within the next few months and anticipate full U.S. deregulation later in 2013," Neal Carter, president of Okanagan said in an interview last month.

Okanagan is also voluntarily consulting with FDA to provide proof that Arctic apples are allergen and toxin free, and safe for human consumption.

What's All the Fuss About GM Foods?
Genetically modified foods are now available in over 25 countries and are thought to be one of the ....

BT Brinjal on the Back Burner
Bacillus Thuringiensis Brinjal, widely known as the BT Brinjal, has been in the eye of the storm ......

EFSA Among Four Slammed by EU Court
EU agency responsible for genetically-modified foods authorisations has been criticised by the ......