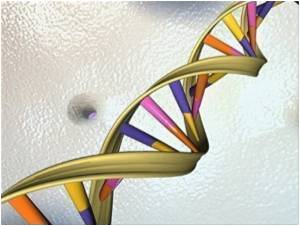 In the not too distant future it might be possible to decide who are genetically predisposed to cancer.

A group of researchers led by scientists from the Virginia Bioinformatics Institute (VBI) at Virginia Tech have developed a new technology for the purpose.

A multidisciplinary team, which includes researchers from the University of Texas Southwestern Medical Center, has created a design for a new DNA microarray that allows them to measure the two million microsatellites (short, repetitive DNA sequences) found within the human genome using 300,000 probes.


Microsatellites, which tend to vary greatly among individuals and have traditionally been used in forensics and paternity tests, are also used to uncover information related to a number of other genetic diseases such as Fragile-X or Huntington's disease. This advancement aided the discovery of a unique pattern of microsatellite variation in breast cancer patients that were not present in the DNA of patients who are cancer-free. Through their evaluation of global changes in the genome, the researchers determined that this pattern change alludes to a new mechanism disrupting the genome in cancer patients and may represent a new breast cancer risk biomarker. The results of the work will be featured in an upcoming edition of the journal Genes, Chromosomes and Cancer.

Genetic testing helps to confirm a genetic condition in an individual and involves q complex laboratory techniques
Advertisement
"We have now arrived at a new biomarker  an indicator that could be used to evaluate the amount of risk that you have for developing cancer in the future," explained Harold "Skip" Garner, VBI executive director who leads the institute's Medical Informatics and Systems Division. "This is part of an effort to understand their (microsatellite) role in the genome and then proceed on directly towards something that is of utility in the clinic. What just came out in our paper is a description of the technology that allows us to very quickly and efficiently and inexpensively measure these two million places using a uniquely designed microarray... It's the pattern on that microarray that provides us the information we need."

Only a small percentage of microsatellites have been linked to cancer and other diseases because there hasn't been an effective method available for evaluating large numbers of these sequences. This technology is enabling scientists to understand the role of these understudied parts of our genome for the first time and may help explain the difference between the known genetic components in disease and those that have been explained by genomic studies. This tool can be used to identify and better understand genetic changes in many different types of cancer with the potential to serve as a universal cancer biomarker. It has already been instrumental in the discovery of a new biomarker in the estrogen-related receptor gamma (ERR-ã) gene, which indicates an individual's increased risk for breast cancer. The group is now pursuing a number of these cancer predisposition risk markers in colon, lung, and other cancers.