Genes or Environment may Trigger Obesity 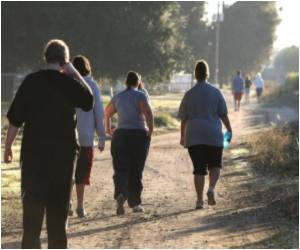 Recent studies have shown that genetic and environmental factors are the key drivers for the obesity epidemic.

Timothy Frayling, Professor of Human Genetics at the University of Exeter thinks that genetic factors are the main driver for obesity in today's environment.

Twin and adoption studies show consistently that variation in body mass index has a strong genetic component, with estimated effects of up to 70 percent, he says.

"We are indeed much more than what we eat, but what we eat can nevertheless help us to be much more than what we are". - Adelle Davis There are thousands out there battling 'the bulge'. With childhood obesity on the rise even children are not spared. If your weight issues are threatening to weigh you down learn more about obesity by taking part in this quiz.
Advertisement
A recent study of over 200,000 people showed that the FTO variant had a stronger effect in sedentary people than in those who are physically active, while studies of physical activity in schoolchildren suggest that education may not be as important as we think, he adds.

"Although DNA variations explain only a small percentage of the variation in body mass index, they provide proof of principle that genetic factors influence it over environmental factors," Frayling said.

In conclusion, he says, genetic factors influence substantially where you are on the body mass index scale in a given population at a given time, and evidence is accumulating that these genetic factors may operate largely through appetite control.

"If true, plans based on changing our environment, such as banning the sale of supersized sugary drinks, may be more successful than plans to increase awareness through education," he said.

However, John Wilding from the University of Liverpool believes that changes in our environment are responsible for increasing obesity.

He acknowledges the role of genetics in the regulation of body weight, but argues that the rapid increase in obesity seen over the past 30 years cannot be due to genetic changes.

In contrast, the evidence that the environment has changed is overwhelming, he says.

He points to the recent fall in the cost of energy dense foods, alongside successful promotion by the food industry, and a decline in physical activity due to changes in transport, technology.

It will be important to identify genetic causes for rare cases that may be treated, he says. However, changes to the food and physical environment are going to be essential if we are to have a meaningful impact on the obesity epidemic.

He calls for "a radical approach ... backed by strong legislation influencing food production and marketing, and ensuring the built environment and transport systems are designed to encourage active living."

"Obesity is a complex disorder with both genetic and environmental causes. The predominant driver is environmental, and changes to the environment will be essential if we are to tackle the current epidemic," Wilding said.

The study has been published in bmj.com.

The BMI calculator helps you assess your weight indicating if it is normal or if you are underweight or overweight, based on your height.
Advertisement
<< Weight-loss Procedures Lack Standardization and Proficiency...
Key Breast Milk Ingredient Synthesized >>