Increased risk of breast cancer has been linked to 110 genes in a comprehensive study by the scientists at Institute of Cancer Research. The genes identified can be used to develop new targeted drugs. The findings of the study are published in the journal Nature Communications .

Their study used a pioneering genetic technique to analyse maps of DNA regions linked to an inherited risk of breast cancer and identify the actual genes involved in raising a woman's risk.

Scientists also linked 32 of the new genes to the length of time women survived breast cancer - suggesting these could be important in the development of the disease and potential targets for future treatments.


‘Identification of new genes pave the way for new genetic tests to predict a woman's risk for breast cancer.’


Scientists at The Institute of Cancer Research, London, looked in detail at 63 areas of the genome that had previously been associated with the risk of breast cancer by mapping studies.

Finding the genes responsible for the increased risk is not straightforward because small sequences of DNA can interact with completely different parts of the genome through a strange phenomenon known as 'DNA looping'.

But the scientists, funded by Breast Cancer Now, used a technique they developed called Capture Hi-C to study interactions between different regions of the genome.

The study uncovered which specific genes were involved and how that might increase a woman's risk of developing breast cancer.

The team at the Breast Cancer Now Toby Robins Research Centre at The Institute of Cancer Research (ICR) found that some of the 63 regions of the genome were physically interacting with genes more than a million letters of DNA code away.

They were able to identify 110 new genes that could potentially be causing an increased risk of breast cancer across 33 of the regions they studied. In the remaining 30 areas, they were unable to find any specific genes.

One third of the target genes for which they had patient data - 32 out of 97 - were also linked to survival in women with oestrogen receptor-positive breast cancer, suggesting they play an important role in the disease.

In the future, testing for these genes could help pick out women who are most at risk of developing the disease - or they could be explored as targets for new drugs.

Scientists at the ICR - a research institute and charity - studied DNA loops in cells from four different types of breast cancer and normal, healthy cells to find out which genes were consistently involved in looping interactions.

Most of the 110 genes found in the study had not been linked to breast cancer risk before, and further work will be needed to determine the extent of their role in the disease.

One of these, called FADD, has previously been linked to head and neck cancer and lung cancer and could be a promising target for new cancer therapies.

Previous large-scale genetics studies have implicated 14 of the 110 genes as playing a role in breast cancer risk, such as the oestrogen receptor gene ESR1, showing that Capture Hi-C is an effective tool for picking up risk genes.

Dr Olivia Fletcher, Team Leader in Functional Genetic Epidemiology at The Institute of Cancer Research, London, said: "Our study took the high-level maps of breast cancer risk regions and used them to pull out specific genes that seem to be associated with the disease.

"We studied how DNA forms loops to allow physical interactions between a DNA sequence in one part of the genome and a risk gene in another.

"Identifying these new genes will help us to understand in much greater detail the genetics of breast cancer risk. Ultimately, our study could pave the way for new genetic tests to predict a woman's risk, or new types of targeted treatment."

Baroness Delyth Morgan, Chief Executive at Breast Cancer Now, which funded the study, said: "These are really important findings. We urgently need to unravel how the genetic changes in the building blocks of our DNA influence a woman's risk of breast cancer, and this study adds another vital piece to this jigsaw.

"More women are now being diagnosed with breast cancer than ever before, and these crucial findings could ultimately help us more accurately predict who is most at risk and develop new targeted treatments.

"Many of these genes have been relatively undocumented to date and we now hope further research will untangle their exact role in breast cancer risk, and how we could use them to stop more women developing the disease."

Professor Paul Workman, Chief Executive of The Institute of Cancer Research, London, said: "Large-scale genomic studies have been instrumental in associating areas of our DNA with an increased risk of breast cancer. This study brings these regions of DNA into sharper focus, uncovering a treasure trove of genes that can now be investigated in more detail.

"The ways in which particular genes influence cancer risk are highly complex. In the future, a better understanding of the genes identified in this study could lead to the discovery of new targeted drugs, or new strategies to improve diagnosis or prevention of the disease." 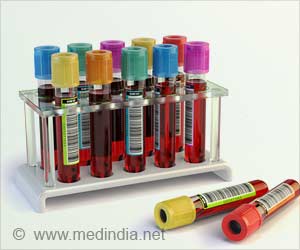 Blood Test Predicts the Effect of Palbociclib Drug on Breast Cancer Patients
A blood test can evaluate the effect of the palbociclib drug on breast cancer patients. The test identifies the circulating tumor DNA fragment in the bloodstream, which is shed by the cancer cells.
READ MORE

Physical Activity Boosts Cognition in Breast Cancer Survivors
Women who exercise have a significant improvement in cognitive processing speed and some improvements in their perceived mental abilities.
READ MORE