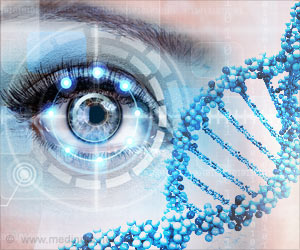 A gene therapy that successfully treats a form of macular degeneration in a canine model was developed by a research team at the University of Pennsylvania. The work sets the stage for translating the findings into a human therapy for an inherited disease that results in a progressive loss of central vision and which is currently untreatable.

The study, published in Proceedings of the National Academy of Sciences, was led by Karina E. Guziewicz, a research assistant professor in Penn's School of Veterinary Medicine, and Artur V. Cideciyan, a research professor of ophthalmology in Penn's Perelman School of Medicine. The research is part of a long-standing partnership between Penn Vet and Penn Medicine scientists to push forward gene and other novel therapies for blinding disorders.

Advertisement
‘The success of gene therapy for inherited eye blinding disorders in a canine model could mean that a human clinical trial is less than two years away.’

"In the eye, you have these two integral retinal cell layers that puzzle into one another and, like a zipper, they interweave your vision cells and the support cells," Cideciyan says. "What this disease is doing is basically unzipping those layers, and what we've done is rezip them, bringing them together tightly."


"With this research," Guziewicz says, "we have demonstrated that there is a therapy that is working in a large animal model. Following safety studies, a human clinical trial could be less than two years away."
Advertisement
Guziewicz and Cideciyan's colleagues who collaborated on the work included vision scientists from Penn Vet's Division of Experimental Retinal Therapies, Gustavo D. Aguirre, professor of medical genetics and ophthalmology, and William Beltran, professor of ophthalmology; and from Penn Medicine Samuel G. Jacobson, professor of ophthalmology.

Best disease, or vitelliform macular degeneration, is an inherited blinding disorder caused by mutations in the BEST1 gene. It often manifests in children and young adults, gradually robbing them of their central vision.

Through a variety of studies during the last several years, the Penn team has shown that dogs, too, develop a strikingly similar disease. A 2014 study led by Beltran revealed that dogs, like humans, have a tiny region at the center of their retina that is densely packed with cone photoreceptor cells--those responsible for reading, driving, and perceiving fine details--called a fovea. BEST1 mutations in both humans and dogs compromise the fovea, leading to vision loss.

Based on success treating other blinding diseases, the group has been developing a gene therapy to treat this condition. And working with the canine model, Guziewicz and colleagues reported last year the discovery of the underlying defect responsible for disease, the failure of a supporting structure known as the retinal pigment epithelium, or RPE, to tightly connect to the light-sensing photoreceptor cells. That finding gave the researchers the outcome measures they needed to determine with confidence whether a gene therapy would work.

In the newly published study, the researchers further probed the canine Best disease while also examining human patients with BEST1 mutations to see if analogous defects could be seen.

While Best disease and related conditions were known to affect central vision, it had long been known that the disorders involved dysfunctions all across the retina. Examining the retinas of dogs with disease mutations, the researchers found a retina-wide abnormality; the internal surface of the RPE, critical for communication with the light-sensing photoreceptor cells, failed to develop normally, preventing the photoreceptors from coming into close contact. This could be detected very early, when the affected dogs were only 6 weeks old.

"This was unexpected," says Aguirre, "and helps explain this puzzling finding in the disease that, while patients have lesions that are very local, when you do electrophysiological measurements you see that there is a retina-wide defect. Now that we can see this separation happening very early between the RPE and photoreceptors, we know that the disease involves a structural abnormality across the retina that precedes the loss of photoreceptor cells."

An additional finding that arose when the dogs were examined under light was that light exposure dramatically increased the severity of the RPE-photoreceptor separation. When dogs were returned to darkness, the separation decreased.

It's unknown whether this association with light is present in human patients. But the researchers did take steps to show that a similar separation between RPE and photoreceptors is affecting vision. By measuring the time it took for patients to adjust to darkness, or acquire "night vision," the researchers obtained a proxy for the time it takes for nutrients to diffuse between these two layers of cells, a process that enables dark adaptation. They showed that a longer distance was associated with much slower rates of nutrient transport.

"This flow of nutrients normally occurs over a very small distance," Cideciyan says. "So if you have a separation between these two layers, the recovery rate to get night vision slows down. The implication is that, if we could correct the apposition of these two tissues, we would correct the visual defect as well."

That is what the researchers set out to do in testing the gene therapy construct. Using a harmless viral vector, they injected a healthy copy of the BEST1 gene, using either the canine or human version of the gene, into the dogs with the canine version of Best disease, at early- and middle-disease stages.

Remarkably, they were able to correct both mild and more severe lesions. Close examination of the eyes of treated dogs revealed that the gene therapy restored the "zipper" structure between RPE and photoreceptor cells. To ensure their therapy was functioning to correct this RPE-photoreceptor interface, they exposed to light the eyes of dogs that had been previously injected with gene therapy and saw that the triggered RPE-photoreceptor cell separation did not occur in the area of the retinas that had been treated.

The therapy appears to be lasting, as the treated dogs' eyes remained disease-free for as long as five years.

Work remains to be done before embarking on human clinical trials, including identifying which patients might benefit, assessing how far advanced a disease could be and still be effectively treated, and ensuring safety so as not to compromise vision that the patients still have. But, given the closeness with which dogs recapitulate the human disease, the researchers are hopeful that the findings will translate.

"On a human level, there are a lot of families who know that previous generations have had this disease, and the young people can live in fear of whether it is going to affect them," Jacobson says. "This is the unveiling of a mechanism and a treatment for a previously untreatable form of juvenile or inherited macular degeneration, and that's a major step forward."

Age Related Macular Degeneration
Age related macular degeneration is a disease of the elderly, wherein the macula or the central ......

Dietary Choices for Macular Degeneration
Ophthalmologists and optometrists in Sweden recommend the use of nutritional supplements, changes .....

Counseling Could Reduce Anxiety in Patients With Macular Degeneration
Undiagnosed anxiety and depression persist in 90% of patients receiving treatment for wet macular .....