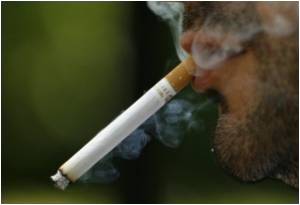 Scientists have identified a gene called CHRNA5, primary source of nicotine carving in the brain. This recent findings opens up new path towards the development of anti-smoking drug.

Tobacco kills more than five million people every year and accounts for nearly one-in-10 adult deaths, 90 percent of them due to lung cancer.

The gene controls a receptor -- an entry point on the surface of brain cells -- which responds to nicotine molecules.


With a normal version of this gene, anything more than a tiny dose of nicotine triggers a message to the brain which says, in effect, "stop consuming," the scientists found.

Lung cancer and smoking are closely associated. Lung cancer risk increases with the intensity of smoking. For more details, take this quiz.
Advertisement
Larger doses unleash a sense of repulsion, similar to "bad-tasting food or drink," lead researcher Paul Kenny at the Scripps Research Institute in Florida said in an email exchange.

But the effect was quite different in mice in which a tiny sub-unit of the receptor, known as alpha5, had been knocked out.

The negative message was never sent -- and as a result, the rodents couldn't get enough of the potent drug.

A similar scenario occurs naturally in some humans, the researchers believe.

Between 30 and 35 percent of the population in the United States is thought to have a form of the CHRNA5 gene that encourages unbridled nicotine craving.

"Our data probably explain the fact that individuals with this genetic variation have increased vulnerability to developing tobacco addiction," Kenny said.

"They are likely to be far less sensitive to the averse properties of the drug, and are thus more likely to acquire a nicotine habit."

On the strength of the new findings, published online in the journal Nature, Kenny has received funding from the National Institute of Drug Abuse to design a new category of drugs.

"This study has important implications for new approaches to tobacco cessation," said Jon Lindstrom, a neuroscientist at the University of Pennsylvania who has investigated other nicotine receptors in the brain and will participate in the follow-up research.

A truly effective anti-smoking drug may require targeting more than one receptor, he said.

"It has beneficial effects on anxiety and attention, among other things, thus making quitting very difficult. Withdrawal symptoms from quitting smoking make this worse."

Nicotine treatments, such as "patches", boost these reward circuits but can themselves be addictive.

Another widely-used drug reduces the craving and pleasure associated with cigarettes by partially blocking these other receptors.

"Restoring or increasing the aversion to high doses of nicotine may complement these approaches and increase their efficacy, or replace them," Lindstrom said.

Every cigarette you smoke is causing irreversible damage to your body; slowly killing you from the inside. It also endangers those around you, your family and children.
Advertisement
<< Hillary Clinton Visit to Haiti Cholera Clinic
New Self-Healing Sticky Gel >>

Smoking is a common problem for patients with schizophrenia. The increased tendency of patients diagnosed with this disorder is to not only smoke, but to do so more heavily than the
Advertisement
News A-Z
A B C D E F G H I J K L M N O P Q R S T U V W X Y Z
What's New on Medindia