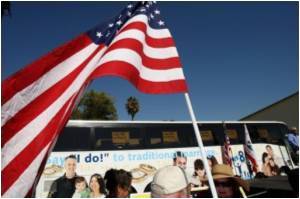 Same-sex marriages were halted in California by a US court until December while the battle over gay rights might even end up in the appeal being sent to the Supreme Court.

The decision by the federal court of appeals came hours after gay marriage opponents urged a ban on the unions to be maintained in the West Coast state, after a judge earlier this month made a landmark decision to overturn it.

Gay marriage supporters faced off with police in San Francisco after the California Supreme Court upheld a voter-approved ban on same-sex weddings.
Advertisement

The Ninth Circuit Court of Appeals granted the motion for a stay and scheduled further proceedings on the appeal to take place the week of December 6 in San Francisco.


The ruling halted an anticipated rush of gay marriages after Judge Vaughn Walker last week authorized same-sex weddings to begin again on August 18, allowing a week for the court of appeals to consider the issue.

Despite moves to have a ban on gay marriage overturned, Prime Minister Kevin Rudd on Wednesday said Australia's ban on same sex marriage would remain.
Advertisement
Opponents of gay marriage argued in their appeal that most of the United States and the majority of countries worldwide do not allow gay marriage because the institution of marriage serves a societal interest.

"California, 44 other states, and the vast majority of countries throughout the world continue to draw the line at marriage because it continues to serve a vital societal interest," the appeal said.

The purpose of marriage is between members of the opposite sex "to channel potentially procreative sexual relationships into enduring, stable unions for the sake of responsibly producing and raising the next generation," it said.

"We are extremely disappointed that loving same-sex couples will have to wait to marry, and that we are once again being denied our fundamental rights," said Equality California Executive Director Geoff Kors in a statement.

"However, we are optimistic for a favorable ruling, and we?re hopeful that same-sex couples will be able to marry as soon as possible."

Some 18,000 gay and lesbian couples tied the knot between May and November 2008 when gay marriage was briefly allowed by the state of California.

Currently only the states of Connecticut, Iowa, Massachusetts, New Hampshire and Vermont, as well as the US capital Washington, recognize gay marriage.

Judge Walker had last week found in favor of activists who argued that the California referendum which barred same-sex marriage was discriminatory and therefore violated the US Constitution.

The referendum, known as Proposition 8, was passed by a 52 percent majority in November 2008, only six months after California's Supreme Court overturned a previous ban on same-sex weddings, sending gays and lesbians flocking to marry.

Legal experts believe the case is almost certain to end up before the US Supreme Court in around two years, once appeals hearings in lower courts have run their course.

Christian groups have said said they had asked Mexico's attorney general to overturn a newly-voted Mexico City law allowing gay marriage and the possibility of adoption, because it
Advertisement
Advertisement