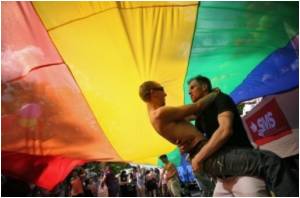 In order to discuss the discrimination they face in their countries, gay leaders from developing countries held a private meeting with World Bank President Jim Yong Kim on Friday.

Six weeks after the bank put a hold on a $90 million loan to Uganda due to its harsh anti-gay laws, Kim held talks with 15 lesbian, gay, bisexual and transgender (LGBT) leaders on mistreatement they suffer due to their sexual orientation.

It was the first meeting of its kind to take place during the high-profile shareholders meetings of the World Bank and International Monetary Fund in Washington.


But it was held in private "to protect the identities of several of the activists who feared reprisals in their home countries," the bank said.

"We are very encouraged to see that the World Bank Group stands ready to listen to the voices of marginalized communities, in particular sexual minorities," the group said in a joint statement.
Advertisement
They urged the bank to put more efforts into studying the links between poverty, sexual orientation and gender identity, and to make sure its projects do not add to the difficulties of women and sexual minorities.

In February, the bank stalled a loan to Uganda to help it develop its health care system after the government put in place one of the world's toughest anti-gay laws.

The government accused the World Bank of blackmail, but refused to bend to pressure.

After the meeting Friday Kim praised the activists for "courage in speaking up on behalf of others in vulnerable situations in their countries, and for pressing home the point that discrimination against any group is unacceptable."