The Washington Hospital Center has conducted two studies on gastric bypass surgery that highlights potential postoperative nutritional deficiencies. Dr. Frederick Finelli and Dr. Timothy Koch presented the reports at the 72nd Annual Scientific Meeting of the American College of Gastroenterology, which suggests that a potentially serious condition can emerge after gastric bypass surgery known as small intestinal bacterial overgrowth that has an impact on absorption of vitamins, minerals and micronutrients such as calcium and zinc.

According to the Washington Hospital Center team, this is a serious issue with widespread implications as approximately 150,000 patients this year will have gastric bypass surgery, and there exists wide variation in surgical techniques. According to Dr. Koch, "patients may develop bacterial overgrowth that interferes with their ability to absorb nutrients, even if they are taking supplements as directed after surgery. Only a gastroenterologist can evaluate these potentially serious small intestinal disorders."

Dr. Koch and his colleagues hypothesized that by altering the gut ecology, gastric bypass surgery could induce calcium deficiency. Surgical changes to the stomach to create the "gastric pouch" in the Roux-en-Y procedure impact the number of acid producing cells in the stomach lining. Furthermore, many gastric bypass patients are given acid suppressing drugs after their surgery. Researchers suspect that the reduction in acid, known as achlorhydria, contributes to the overgrowth of bacteria in the small intestine. According to Dr. Koch, competition between bacteria and the human host for ingested nutrients leads to malabsorption and potentially serious complications due to micronutrient deficiency.


In the studies presented at the ACG, Dr. Koch's team found that in a retrospective review of gastric bypass patients, almost all of the 43 patients who had hydrogen breath testing for small intestinal bacterial overgrowth ("SIBO") had abnormal findings. Researchers also measured levels of calcium and found that those with SIBO had lower calcium levels. Researchers warn that calcium malabsorption may increase the risk for developing osteopenia (low bone mineral density), osteoporosis (a progressive bone loss that may increase the risk of fractures), or osteomalacia (softening of the bones due to defective bone mineralization.)

In a second study, Dr. Koch and his colleagues reviewed that same group of patients to examine the relationship between SIBO and zinc deficiencies, and found a positive correlation. In the case of zinc absorption, the physiological evidence supports zinc absorption in the jejunum by a trancellular route involving a zinc-specific transporter, Zip4.

In the Roux-en-Y procedure, surgeons make the stomach smaller by creating a small pouch at the top of the stomach using surgical staples or a plastic band. The smaller stomach is connected directly to the middle portion of the small intestine (jejunum), bypassing the rest of the stomach and the upper portion of the small intestine (duodenum). Dr. Koch explained that the wide variation in surgical techniques for gastric bypass means that patients should be aware of the risk of problems absorbing nutrients, and should consult with a gastrointestinal specialist.

One Among Every Five Patient Does Not Get Psychological Clearance for Bariatric Surgery
A study by Rhode Island Hospital and Brown University researchers has reported that 18 percent of 500 candidates for bariatric surgery did not receive psychiatric clearance for the surgery.
READ MORE 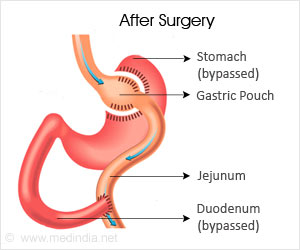