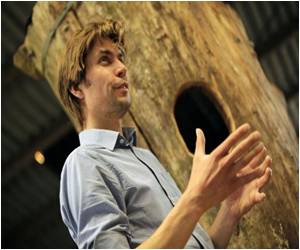 Freezing winds and a glimmer of cold light pass through the three-foot by two-inch (one metre by five centimetre) crack in Martha and Jan Bos's stable in Middelstum, a few miles (kilometres) from the Netherlands' most northern point.

Their farmhouse, built in the early 20th century, has around 15 large cracks and part of the floor inside the entrance has dropped around three inches.


"We've been living here for 25 years and for the last five years we've had regular earthquakes," Martha Bos, 48, told AFP.

Her husband Jan, wearing traditional wooden clogs, is tending to the sheep: "We don't want to leave, we've built our lives here but we're really very afraid of a big earthquake," she said.
Advertisement
Their home in the northern province of Groningen is built on top of the biggest gas field in the EU, which gives the Netherlands -- the world's 10th-biggest gas producer -- two-thirds of its gas, according to the US Energy Information Administration (EIA).

In February of this year alone, four earthquakes above magnitude 2 have hit the region.

The earthquakes are a "natural" result of huge pockets of air left underground by massive gas extraction.

But the earthquakes have become increasingly frequent after the Netherlands more than doubled its gas production since 2000, hitting 50 billion cubic metres annually, according to a report published earlier this year by Jan de Jong, the inspector general of the State Mines Surveillance (SoDM) service.

The Dutch Oil Company (NAM), a joint enterprise between energy giants Shell and Exxon, which is in charge of the extraction admits that the earthquakes are linked to its activities and has set up a 100-million-euro (130-million-dollar) compensation fund.

"That's good, but it's not enough," said Corina Jansen, who heads the 1,000-member Groninger Bodem Beweging (Groningen Earth Movement), set up because of "the tumult created by the earthquakes.

"Some damage is paid for but besides the fact that the procedure taks a long time, old cases of cracks or land subsidence are not covered," Jansen told AFP.

"People have had it up to here and if necessary we won't be afraid to go to the courts to defend everyone's safety," she said.

The SoDM's De Jong wrote that if gas extraction carries on at its current rate, there's a one in 50 chance that an earthquake of 4.5 magnitude or higher will hit the area in the next 12 months.

"It's not only fear, but also the uncertainty and anger at not being listened to by the government," said Marijke Bronskema, who lives in the nearby village of Usquert, among the flat fertile fields of the northern Netherlands.

Almost every window or doorframe of her one-storey house has been weakened by a network of cracks about six inches long.

"We're supposed to sell the house because my husband just lost his job, and we had just renovated everything, but who would want to buy a house where you're regularly hit by earthquakes?" she said, accusing the government of not listening.

The Dutch government has reaped around 250 billion euros from its gas fields since the 1960s, according to Finance Ministry figures.

In 2011, the state raked 12 billion euros of gas cash into its coffers, representing around 8 percent of state revenues, and that is set to hit 14 billion euros when 2012 figures are released.

Without the gas, the Netherlands' deficit would have been around 6.2 percent in 2011, or around the same as that of crisis-hit Cyprus.

Faced with the huge challenges of the eurozone crisis, the damage and worry in the north of the country, far from the capital Amsterdam and seat of government at The Hague, don't carry much weight, according to the area's inhabitants.

"This is a real cash cow for the government," said Bronskema.

In his report, De Jong suggested the government reduce its gas extraction "as quickly as possible to avoid a big earthquake," but his call was quickly rejected by Economic Affairs Minister Henk Kamp as "economic irresponsibility".

"I need further information," he said during a debate on the subject in parliament in January during which some opposition parties accused the government of putting national economic interest ahead of citizens' wellbeing.

"On an economic level, it makes no sense to take a decision immediately," Kamp said.

The NAM, which failed to respond to repeated interview requests from AFP, wrote to De Jong to say it would "take measures which according to us are reasonable to reduce as much as possible the damage caused by the earthquakes" but declined to reduce gas extraction.

Meanwhile, some Dutch northerners are more stoical than others.

"Economic interests are important and that's how it is," said mechanic Elze Schollema.

"But it's true that if I had a choice, I'd rather the earthquakes stopped," he said.

Contaminated Smoked Salmon Manufactured in Dutch Factory Behind Salmonella Outbreak in US and Netherlands
Smoked salmon from a Dutch fish factory has led to hundreds of Dutch and American consumers ......

Thousands of Lives Can Be Saved If Only Netherlands Imposes Stronger Tobacco Control Policy
A new study shows that 145,000 deaths could be averted in the next 30 years in the Netherlands by .....