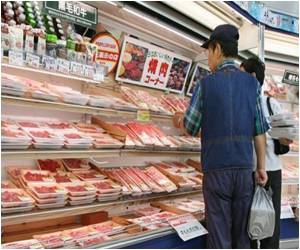 Bags of rice are being checked by the Fukushima Prefectural Government in Japan for radiation.

Governor Yuhei Sato, who visited an inspection center in Nihonmatsu on the first day of the inspections, said that he 'wants safe Fukushima rice to be delivered across the country'.

Fukushima has started ultrasonic thyroid exams on Sunday for the prefecture's 360,000 children aged up to 18 to monitor the health conditions of young people amid the Fukushima No.
Advertisement

According to the Japan Times, the checks were considered necessary to allay fears caused by the nuclear crisis at the Fukushima No. 1 power station.


On the first day of the inspection, 1430 bags of early harvest rice were inspected.

The equipment took only about 10 seconds to check each bag, with all of the bags showing radioactivity levels below 11 becquerels per kilogram, the lowest measurable limit, the report said.

The plight of Fukushima refugees is still disappointing and many of them are in a state of limbo even though it is a year after being forced to abandon homes and businesses.
Advertisement
"I don't think that consumers will feel safe immediately, but we have to demonstrate scientifically proven safety and security," rice farmer Takayuki Anzai said.

According to the report, the size of this year's rice harvest in Fukushima Prefecture is expected to be around 360,000 tons, or some 12 million bags, the prefectural government said.

Most of the checks will be finished by the end of the year.

The shipment of rice harvested in two more districts in Fukushima Prefecture has been banned by the Japanese government after dangerously high levels of radioactive cesium were detected.
Advertisement
<< Helping Confused Parents Decipher Their Kids' Text Messages...
Crack Down on Cocaine Trafficking By Brazil >>

X-Ray
News Archive
News Resource
Advertisement
News Category
How to Reduce Needle Anxiety in Children? Tobacco Addiction: Here's How to Break the Habit Parents are 'Winging It' on Their Kids' Mobile Use Ankle and Ankle Movements While Riding an Hoverboard Is It Healthy to Let Your Mind Wander?
More News
Sign up for Wellness Consult a Doctor Sign up for Selfcare

Post-Nasal Drip The Essence of Yoga Nutam (400mg) (Piracetam) Find a Doctor Blood Donation - Recipients Blood Pressure Calculator Hearing Loss Calculator Vent Forte (Theophylline) Pregnancy Confirmation Calculator Diaphragmatic Hernia
This site uses cookies to deliver our services. By using our site, you acknowledge that you have read and understand our Cookie Policy, Privacy Policy, and our Terms of Use