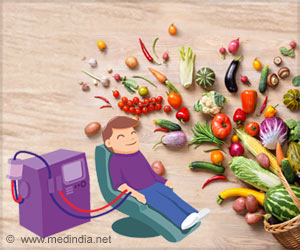 In adults without preexisting cardiovascular disease (CVD), a diet rich in fruits and vegetables given over a relatively short period of time was associated with significantly lower levels of markers for subclinical cardiac damage and strain, stated findings from an observational analysis of the DASH trial are published in Annals of Internal Medicine.

Researchers from Beth Israel Deaconess Medical Center studied data and stored serum specimens for 326 participants of the original DASH trial to compare the effects of diets rich in fruits and vegetables with a typical American diet in their effects on cardiac damage, cardiac strain, and inflammation in middle-aged adults without known preexisting CVD.

Top reasons why you should eat fruits to lower blood pressure and reduce the risk of heart disease. Antioxidants in fruits keep your blood pressure under control.
Advertisement
‘Adopting a healthy diet directly reduces cardiovascular disease (CVD) injury or is effective for the primary prevention of CVD.’

They found that after 8 weeks, participants in both the fruits and vegetables and the DASH diet groups had significantly lower concentrations of the biomarkers for subclinical cardiac damage and strain compared with control group. These associations did not differ between the DASH and fruit and vegetable diets, and none of the diets affected hs- CRP, a marker of inflammation.


The authors hypothesize that dietary factors common to both the DASH and fruit-and-vegetable diets, such as higher amounts of potassium, magnesium, and fiber, may partly explain the observed effects. These findings strengthen recommendations for the DASH diet, or increased consumption of fruits and vegetables as a means of optimizing cardiovascular health.

Include vegetables and fruits as part of your diet and improve your overall health.
Advertisement
<< COVID-19 in Tamil Nadu: 536 Test Positive for Coronavirus, T...
Yoga Helps Improves Mental Health >>

Why Do We Eat - Nutrition Facts
News Archive
News Resource
Advertisement
News Category
Robotic Procedure For Heart Reveals 100% Clinical Success Artery Stiffness may be a Better Predictor of Type 2 Diabetes Prediabetes Associated With Increased Heart Attack Risk New Genetic Analysis: Multiple Diagnoses can be Forming a Cure for Mental Illness Unpaid Student Loan Debt is a Burden to the Heart Too
More News
Sign up for Wellness Consult a Doctor Sign up for Selfcare