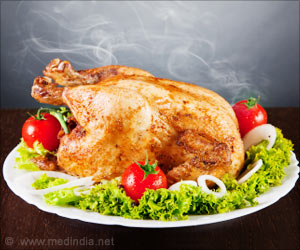 Like HBO's mini-series on alleged murderer Robert Durst, Frontline's new episode "The Trouble With Chicken" investigates, with careful research and damning interviews, a lethal mystery that spans decades and states across the country.

"The Trouble With Chicken" which premiered Tuesday night on The Public Broadcasting Service (PBS) and is now streaming online, is pretty much as close as the food safety world has ever gotten to its own "The Jinx."
Advertisement

But the killer in the documentary doesn't wield a knife or a chainsaw. It isn't even a person. It's a type of bacteria: salmonella Heidelberg, which sickened hundreds of people in two major outbreaks in 2004 and 2013. Both of them stemmed from chicken sold by California-based poultry producer Foster Farms.


Both Foster Farms outbreaks received ample media attention when they occurred. But the nature of breaking news coverage kept most people, even food safety watchers, from being able to understand the full story behind them. And "The Trouble With Chicken" shows, in 53 minutes, what a compelling story it is.
Advertisement
The documentary begins with a portrait of one family that was affected by the second of the two outbreaks. In October 2013, the 18-month-old son of Arizona residents Amanda and James Craten ate chicken from Foster Farms and came down with a serious salmonella infection, one that spread to his brain and caused a potentially fatal abscess. An emergency craniotomy -- which involved cutting open his skull to allow doctors to access his brain -- saved his life, but left him in a life-threatening coma.

Noah Craten eventually made a full recovery, but in "The Trouble With Chicken," Frontline reporter David Hoffman tries to figure out why he became sick in the first place.

The major villain in the story is, of course, Foster Farms, the biggest poultry company on the West Coast. The documentary reveals how Foster Farms resisted making significant improvements to its food safety plans during and after its outbreak in 2004, despite repeated warnings from the FDA and the Oregon Department of Health. Hoffman argues that the company's refusal to reform led directly to the second outbreak of salmonella Heidelberg.

More galling still? Foster Farms also reportedly refused to take action for more than a year after the 2013 outbreak began, because its executives insisted that epidemiological evidence didn't conclusively link its chicken to the outbreak, which ended up sickening more than 600 people over 16 months.

Foster Farms executives refused to speak with Hoffman for "The Trouble With Chicken," though, so he ends up focusing much of his outrage on the government officials and policies who failed to prevent the 2013 outbreak, or even stop it once it became obvious.

The documentary's equivalent of the famous interview with Robert Durst in the finale of "The Jinx" is interviews with two high-ranking USDA officials, Secretary of Agriculture Thomas Vilsack and Food Safety Inspection Service administrator David Goldman. They both squirm when Hoffman asks them tough questions about their actions. The most jaw-dropping moment comes when Hoffman asks Goldman what punishment Foster Farms was handed for its gruesome food safety record. "There's no specific action that I'm aware of," Goldman says after a pause.

Vilsack tries to defend the USDA's actions by saying that the organization was restrained by its lack of authority. But when Hoffman notes that food safety crusader Rep. Rosa DeLauro (D-Conn.) told Vilsack to ask for more authority, and asks why he didn't, Vilsack can't give a satisfactory answer.

"Well, right now, our focus has been primarily on making sure that our regulatory systems are what they need to be," Vilsack says.

There's so much more in the documentary, though: a riveting account of the epidemiological detective work that tied Foster Farms to the outbreak, a look inside an industrial chicken producer, a damning history of American food safety regulations. There are even, amidst incompetence and inaction, a few genuine heroes, like DeLauro and famed food safety lawyer Bill Marler. It's a must-watch for anyone who eats chicken, anyone who cares about food safety and anyone who likes compelling documentaries.

If you've already watched "The Trouble With Chicken" and want to learn more about Foster Farms and food safety in general, one good place to start would be Lynne Terry's major feature on the outbreak, published in the Oregonian earlier this month. A warning, though: If you watch the Frontline episode and read her piece, you're not going to want to eat chicken for quite a while.

Source: Medindia
Advertisement
<< Wonder Woman Had Three Fingers Growing Out Of Her Arm but th...
Romanian Teen Burst into Flames While Taking The 'Ultimate S... >>

Bird Flu Spreads Among Wild Birds, Chickens, Turkeys in US; Poses Low Risk to People
Since December 2014, cases of the highly pathogenic H5 avian influenza virus have spread through 16 ...