From Handbag to True Blue Suits: The Thatcher Look 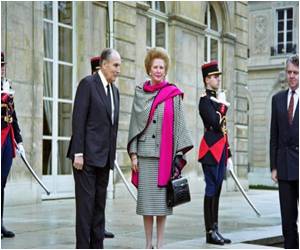 A handbag designer has been invited to Margaret Thatcher's funeral. This gesture is testament to the way the Iron Lady used fashion to forge her image.

Memorably described by former French president Francois Mitterrand as having the "eyes of Caligula and the mouth of Marilyn Monroe", Thatcher's style mixed power dressing with femininity.

The centrepiece was the famous handbag that struck fear into the hearts of ministers, but the blue skirt-suits and shoulder pads, the pearls and her bouffant hair became iconic in their own right.


So it was no surprise to see Anya Hindmarch, the fashion accessories designer for whom Thatcher was one of many celebrity clients, on the guest list for Wednesday's funeral at St Paul's Cathedral.
Advertisement
Thatcher herself said in a television interview in 1985: "It is not unfeminine to be well-tailored. Indeed, it often perhaps concentrates on what you are going to say if you have got well-tailored things on, because people no longer look at your clothes."

The Thatcher look began with the hair, a golden helmet anchored in place by hairspray.

Before she was in power she was fond of hats, including a gaudy striped affair that she wore for a party conference speech. But as shown in a scene from the Meryl Streep biopic "The Iron Lady" they disappeared when she ran for the leadership, to be replaced by a swept-back bouffant.

A memorable exception to the bare-headed rule came when she teamed a cream headscarf with clear protective goggles while at the wheel of a Challenger tank in Germany in 1988.

Her clothes also showed the evolution of Thatcher's political style.

As late as the 1970s the mother-of-two channelled the housewife look, favouring the same colourful shift dresses worn by the female electorate whose votes she tried to win over by identifying with their struggles to balance the books at home.

But that all changed with the blue skirt-suit she wore as she entered 10 Downing Street for the first time on May 4, 1979.

The colour was the ultramarine blue of the Conservative party, with a tailored jacket over a white and blue patterned shirt and a heavily pleated skirt.

The look would appear again and again, including when she gave her famous "No, no, no" speech in parliament against European federalism.

Thatcher reputedly bought many of her clothes in bulk from British high-street retailer Marks and Spencer.

But her favourite designer was the British heritage outfitter Aquascutum, which provided the fur-collared camel coat that she wore on her triumphant visit to Moscow in 1987.

Hilary Alexander, fashion critic of Britain's Daily Telegraph newspaper, said Thatcher's wardrobe on the Soviet trip "made world headlines and established her as the decade's most important 'power dresser', alongside Diana, Princess of Wales."

Thatcher, however, set out a thrifty and practical approach.

"I really only dress in two kinds of ways," she said in a 1984 television interview.

One style was based on "a classic suit and many, many varied different blouses," she explained.

"And then also if you're travelling overseas and you arrive by aircraft, I do find it much easier to arrive with a coat and dress outfit for a very simple reason -- the moment you get on the aircraft you hang up your coat and then you can put it just before you get off, and you're not full of creases."

"But you always will have to budget and I was brought up on that, so it's nothing new to me."

Seven of Thatcher's suits, including the jade-green wool outfit worn on the day she was confirmed as Conservative leader in 1975, fetched £73,000 at auction a London sale in September.

Pussy bow blouses were another 1980s wardrobe staple -- also favoured by Diana -- that added a touch of feminity.

Pearl jewellery was omnipresent. Traditional without being flashy, the pearls were summed up by the Guardian newspaper as "'this lady's not for turning' in a necklace".

But it was her square, black Asprey handbag that remained the quintessential Thatcher symbol.

Thatcher often used the same bag on important occasions, carrying it as she entered Downing Street with her husband Denis and using it at summits with then US president Ronald Reagan and Soviet leader Mikhail Gorbachev.

The term "handbagging" passed into common currency in Britain after it was used by her ministers to describe a dressing down at the hands of their formidable female leader.

Cartoonists often portrayed Thatcher clobbering opponents with it while Lord Kenneth Baker, who served in Thatcher's cabinets from 1985 to 1990, called the bag her "secret weapon".

Thatcher often placed her handbag on the cabinet table as a symbol of her authority and "would usually get from it some paper with a conclusive argument," Baker recalled.

But her cabinet colleagues also acknowledged her femininity.

"She was a very beautiful woman. She had beautiful hands and lovely ankles and she knew precisely how to use both," John Gummer said after she died.

"It was a pleasure to see the way she turned herself out and the way she never forgot she was a woman."

Bereavement
Bereavement refers to grief, pain and sadness following the loss of a loved one, especially during ....