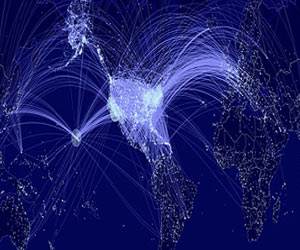 Public health crises of the past decade  such as the 2003 SARS outbreak, which spread to 37 countries and caused about 1,000 deaths, and the 2009 H1N1 flu pandemic that killed about 300,000 people worldwide  have heightened awareness that new viruses or bacteria could spread quickly across the globe, aided by air travel.

While epidemiologists and scientists who study complex network systems  such as contagion patterns and information spread in social networks  are working to create mathematical models that describe the worldwide spread of disease, to date these models have focused on the final stages of epidemics, examining the locations that ultimately develop the highest infection rates.

But a new study by researchers in MIT's Department of Civil and Environmental Engineering (CEE) shifts the focus to the first few days of an epidemic, determining how likely the 40 largest U.S. airports are to influence the spread of a contagious disease originating in their home cities. This new approach could help determine appropriate measures for containing infection in specific geographic areas and aid public health officials in making decisions about the distribution of vaccinations or treatments in the earliest days of contagion.


Unlike existing models, the new MIT model incorporates variations in travel patterns among individuals, the geographic locations of airports, the disparity in interactions among airports, and waiting times at individual airports to create a tool that could be used to predict where and how fast a disease might spread.

Swine flu, a type of influenza caused by a new strain of the H1N1 Type A influenza virus has originated from the pigs. Winter always brings along the chills and the flu, make sure you're safe this season.
Advertisement
"Our work is the first to look at the spatial spreading of contagion processes at early times, and to propose a predictor for which 'nodes'  in this case, airports  will lead to more aggressive spatial spreading," says Ruben Juanes, the ARCO Associate Professor in Energy Studies in CEE. "The findings could form the basis for an initial evaluation of vaccine allocation strategies in the event of an outbreak, and could inform national security agencies of the most vulnerable pathways for biological attacks in a densely connected world."

Juanes' studies of the flow of fluids through fracture networks in subsurface rock and the research of CEE's Marta González, who uses cellphone data to model human mobility patterns and trace contagion processes in social networks, laid the basis for determining individual travel patterns among airports in the new study. Existing models typically assume a random, homogenous diffusion of travelers from one airport to the next.

However, people don't travel randomly; they tend to create patterns that can be replicated. Using González's work on human mobility patterns, Juanes and his research group  including graduate student Christos Nicolaides and research associate Luis Cueto-Felgueroso  applied Monte Carlo simulations to determine the likelihood of any single traveler flying from one airport to another.

"The results from our model are very different from those of a conventional model that relies on the random diffusion of travelers ... [and] similar to the advective flow of fluids," says Nicolaides, first author of a paper by the four MIT researchers that was published in the journal PLoS ONE. "The advective transport process relies on distinctive properties of the substance that's moving, as opposed to diffusion, which assumes a random flow. If you include diffusion only in the model, the biggest airport hubs in terms of traffic would be the most influential spreaders of disease. But that's not accurate."

For example, a simplified model using random diffusion might say that half the travelers at the Honolulu airport will go to San Francisco and half to Anchorage, Alaska, taking the disease and spreading it to travelers at those airports, who would randomly travel and continue the contagion.

In fact, while the Honolulu airport gets only 30 percent as much air traffic as New York's Kennedy International Airport, the new model predicts that it is nearly as influential in terms of contagion, because of where it fits in the air transportation network: Its location in the Pacific Ocean and its many connections to distant, large and well-connected hubs gives it a ranking of third in terms of contagion-spreading influence.

"The study of spreading dynamics and human mobility, using tools of complex networks, can be applied to many different fields of study to improve predictive models," says González, the Gilbert W. Winslow Career Development Assistant Professor of Civil and Environmental Engineering. "It's a relatively new but very robust approach. The incorporation of statistical physics methods to develop predictive models will likely have far-reaching effects for modeling in many applications."

"Nowadays, one of the most ambitious scientific goals is to predict how different processes of great economic and societal impact evolve as time goes on," says Professor Yamir Moreno of the University of Zaragoza, who studies complex networks and spreading patterns of epidemics. "We are currently capable of modeling with some detail real disease outbreaks, but we are less effective when it comes to identifying new countermeasures to minimize the impact of an emerging disease. The work done by the MIT team paves the way to find new containment strategies, as the newly developed measure of influential spreading allows for a better comprehension of the spatiotemporal patterns characterizing the initial stages of a disease outbreak."

This work was supported by a Vergottis Graduate Fellowship and awards from the NEC Corporation Fund, the Solomon Buchsbaum Research Fund and the U.S. Department of Energy.

A new research has demonstrated and recommended the use of Chest Ultrasound for an early and accurate diagnosis of Influenza A (H1N1) pneumonia.
Advertisement
<< Pet Therapy to Cheer Up Kids
On a Mission to Find How Cigarette Smoking Weakens Bones >>

Flu Vaccine may be Safely Administered to Children With Egg Allergy: Study

Loram (2 mg) (Lorazepam) Pregnancy Confirmation Calculator The Essence of Yoga Diaphragmatic Hernia Find a Hospital Hearing Loss Calculator Color Blindness Calculator Indian Medical Journals Drug Side Effects Calculator How to Reduce School Bag Weight - Simple Tips
This site uses cookies to deliver our services. By using our site, you acknowledge that you have read and understand our Cookie Policy, Privacy Policy, and our Terms of Use